How to Properly Use a Fingerprint Scanner to Get the Best Performance Out of It?

Despite the advancements in fingerprinting recognition technology and availability of highly accurate fingerprint readers, a dirty finger or smudge on the scanning surface is enough to disrupt the performance of your scanner. In some less common cases, technical limitations and inefficiencies may be the causes of poor fingerprint capture. However, in most cases, improper use or poor maintenance is the reason of poor scanner performance. 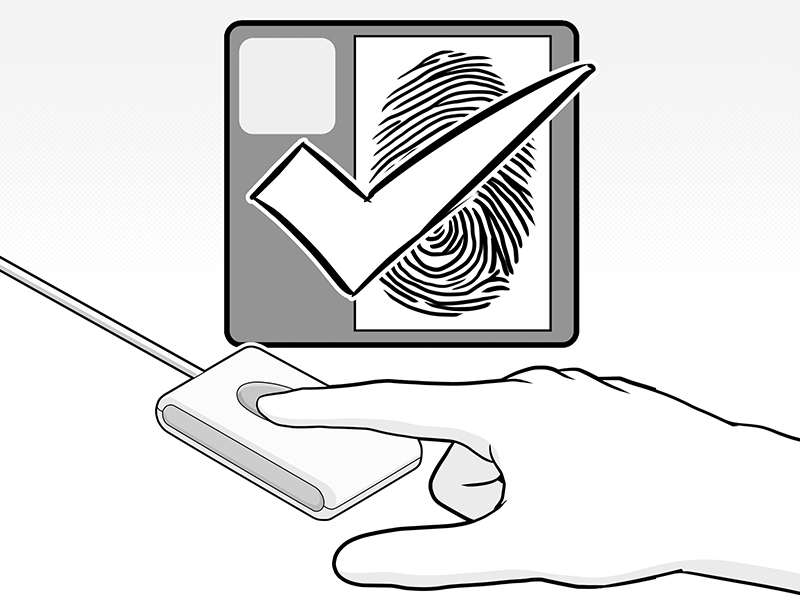 Several techniques have been developed for digital fingerprinting. They can be put in different categories on the basis of factors like sensing methods, captured dimensions, etc.

In any electronic fingerprinting device, sensor is an important piece of hardware, which is responsible for capturing the fingerprint image. There may be different sensing methods depending on physical and chemical properties of the material used.

Following are the most popular sensing methods used in digital fingerprinting techniques:

Thermal sensing makes use of the fact that there is a very slight temperature difference between ridges and valleys of fingerprints, which can be measured using thermal line sensors and generating the pattern image

Most scanners and sensors capture two dimensional image of fingerprint image with the help of different sensing techniques.

Most fingerprint recognition systems require subjects to touch a scanning surface, which is considered intrusive. To reduce the level of intrusiveness, contact less fingerprinting techniques were developed in which fingerprint details can be scanned from a distance using a camera setup.

Electronic / digital fingerprinting techniques by the amount of details captured

In mobile and portable devices smaller sensors and components are used to keep the device lightweight and compact. These sensors and the underlying recognition algorithm are designed only to capture and process a portion of fingerprints.

Fingerprint recognition systems, in which compactness is not prime requirement, larger area of fingerprints is captured and process. Since full fingerprint systems capture and process way more details than the partial ones, they are considered securer.

How accurate is a fingerprint scanner?

It has been long established that each fingerprint is unique and no two fingers (even of the same person or even twins) carry similar fingerprint features.  Now when we know that fingerprints are unique, we only have to concentrate on the technology part that how to capture, process and match these unique characteristics, so that there are virtually no errors. While keeping error rate to zero is practically not possible due to several reasons, present day fingerprint recognition systems are highly accurate and offer high level of tolerance against several environmental factors, which could lead to unreliable results otherwise.

In a study conducted on the accuracy of the computerized fingerprint matching NIST (National Institute of Standards and Technology) concluded that…
“Computerized systems that automatically match fingerprints have become so sophisticated that the best of them are accurate more than 99 percent of the time, according to the most comprehensive known study of the systems ever conducted.”
NIST

This study, is however more subjective as it looks at the number of times the fingerprinting attempts were made. A more detailed approach would consider many other factors like encrypted domain or where or when the template protection is implemented.

If you are an enrolled user and presenting the accurate biometric identifier, a biometric system may not let you in, while a password based system always will. Biometrics is unlike passwords.

Individual researchers, companies as well as academic research groups have been able to report some ground breakingaccuracy stats with the recognition algorithms submitted by them. The best matching accuracy (as of April 2019) out of the fingerprint verification competition was EER = 0.022%, which was reported by Beijing Hisign Bio-info Institute and achieved with their HXKJ(version 2.4) algorithm. Algorithm named MM-FV version 11.0 was able to achieve Equal Error Rate of 0.027%. MM-FV was developed by a technology firm named Neurotechnology and was reported on FVC-ongoing in January 2019.The state-of-the-art MCC (Minutia Cylinder Code) based fingerprint matching algorithm achieved the EER = 0.49% on database FVC2002 DB2, and the EER = 0.12% on database FVC2006 DB2.

Following are the top 5 EER published on FVC-ongoing:

Here, it is worth noting that above results are based on FVC-ongoing benchmark FV-STD-1.0, i.e. they were achieved in ideal conditions. FV-STD-1.0 contains fingerprint images acquired in operational conditions using high-quality optical scanners. Algorithm results using FV-STD-1.0 would reflect the expected accuracy in large-scale fingerprint-based applications.These algorithms were fed with better quality of fingerprint images than non-ideal conditions (for example, latent prints from crime scenes). If we have a look at the result using the same algorithm and benchmark FV-HARD-1.0, which contains a relevant number of difficult cases (noisy images, distorted impressions, etc.) and makes fingerprint verification more challenging.

The decline in performance stats for top two algorithms is apparent. The performance drop proves that image quality is the most essential criteria, which can improve or distort the performance of a recognition algorithm.

Why do fingerprints get rejected?

Despite flaunting accuracy of more than 99 percent of the time, people do come across failed fingerprinting attempt in practical scenarios. There can be many instances a fingerprint recognition system will reject your correct fingerprinting attempts, when it finds that sample is not good enough to be processed and ask you to re-scan your finger.

This happens because external factors affect the quality of fingerprints more than the internal inefficiencies of the recognition systems. Avoiding the causes of poor fingerprints can help improve the fingerprint quality and help get a clear fingerprint image.

There can be several reasons why your fingerprints get rejected; we will discuss causes of poor fingerprints sorted in more common to less common order:

Poor scanner maintenance and harsh usage can be called the #2 reason why your fingerprints attempts can fail. Today’s fingerprint scanners are adequately robust; however, they still require some maintenance and care to keep up. Cleaning scanner glass, keeping it away from dust and liquid, gentle usage and avoiding rubbing the scanner glass, etc. are some of the easy ways you can have the scanner serving you for years.

Price of fingerprint scanners very from $25 to $4500 and may even go lower or higher than that. A low end fingerprint scanner may be able to serve your purpose but you will have to make compromises in terms of accuracy, security and efficiency. Using low-end inexpensive parts, they may not produce high quality fingerprint images or capture enough details, making it more challenging for recognition algorithm to be efficient.

Limitations of the recognition system

Today’s fingerprint scanners are adequately accurate; however they are still not 100% precise and have their own set of limitations. Other than that, quality of sensors very greatly from low to high-end scanners. Acquisition area and the output resolution are the most critical quality parameters, which, at the PIV IQS minimum requirements, cause an average performance drop of 73% and 20%, respectively.Limitations of hardware or software like Inefficiencies of data acquisition subsystem, matching algorithms, etc. can also be the causes of poor fingerprints.

Automated fingerprint recognition systems require a certain number of fingerprint features to establish and verify identity. A small percentage of target population may have unusable fingerprints for the purpose of automated identification. There may be several reasons behind this, e.g. certain skin diseases, injury, laborious work conditions, friction, etc. Unusable fingerprint is one of the causes of poor fingerprints and why fingerprints get rejected for some individuals.

How to get a clear fingerprint image and improve image quality?

We discussed have above that user behavior, low quality scanners and poor maintenance are the top causes of poor fingerprints, which leads to failed scanning attempts. There are a few things you can take care of to improve image quality and make sure that you always get a clear fingerprint image every time you scan your fingerprint.

Go for a good quality scanner

Scanner quality can make all the difference in matching accuracy, efficiency and security of a fingerprint recognition system. Investing on a good quality scanner is always a good idea specially if there are high expectations for security, accuracy and efficiency. Good quality scanners may be more expensive than low-end offerings, but they use good quality sensors, electronic components and material that results in improved performance, speed and accuracy.

Use the fingerprint scanner properly

Just getting a good quality scanner is not enough until you know how to properly use it. Fingerprint scanner can be a delicate device, specially the scanning area, which is mostly made of glass.

Following are a few tips to properly use a fingerprint scanner that will help you get optimum performance and longer shelf life out of your scanner:

Once you are done with Invest-on-a-good-quality-scanner part, regular maintenance is all you need to do get the best results out of it.

Glasses are smudge magnets and once it gets a layer of smudge on it, it start affecting the performance of your scanner.  Getting rid of dirt, dust and smudge is easy if you do it with right cleaning material.

How to clean scanner glass?

Things to take care of while cleaning the scanner glass

Do not use harsh chemicals or alcohol based cleaners to clean the glass surface.

Do not rub the glass surface abrasive material.

Do not pour the glass cleaner directly on the scanner glass.

Scanner maintenance does not require any expert skills but the improvements in scanner performance after simple cleaning will surprise you.

Using a fingerprint scanner properly is as important as choosing the right fingerprint scanner. Investing on a high quality scanner is always a good idea as it will not only perform better but will give better return on investment in long run.Accuracy of a fingerprint scanner does not depend entirely on the hardware or the underlying algorithm. How you use it and maintain it, are equally important. So next time before you blame your fingerprint scanner for being inefficient or not performing adequately, ask yourself: when was the last time you cleaned it?