It can easily take up FBI background check as well as mobile acquisition applications where these image quality specifications are the minimum requirements. Having an FBI certified biometric scanner is always a plus as it ensures high quality fingerprint scans even if you use them for non-FBI applications.

Security is the core element in Suprema readers and RealScan G10 is not an exception. This Suprema 10 print fingerprint scanner comes equipped with advanced machine learning powered liveness detection mechanism that can instantly rule out any fake fingerprint attack.

Suprema readers are not only aesthetically appealing; they are also designed keeping user convenience in mind. RealScan G10’s extra-wide platen offers enough room for convenient placement of 4 finger slap, even if you have the largest hand around. Once placed, G10’s speedy scanning process will take no time to capture your fingerprints, be it thumbs, 4 finger slap or rolled scans.

RealScan G10 is a real survivor when it comes to endure extreme environment, harsh usage or high volume scanning. In back to back high volume fingerprint scanning scenarios (such as large scale enrollments, voter identification, etc.) user fingers may have all kind of contaminants including dust, dirt, etc. These contaminants may not only impact scanner performance may leave scars on the sensor surface with repetitive usage.

Experts at Suprema Biometrics understand the importance of durability and have treated RealScan G10’s platen to endure not only harsh usage but also extreme weather and unfavorable operating environment. This is why Suprema readers’ platen can stay scratch-free even after a long time of repetitive and high volume usage. On top of the scratch-free platen, RealScan G10’s IP54 rated sealed construction ensures that water or dust cannot creep in.

Scanning rolled fingerprint images can be challenging for an ordinary fingerprint scanner as several aspects have to be taken care of that might go wrong while performing the scan. A slight slip of finger can spoil the capture and the image would be rejected by the quality threshold measure of the system.

Suprema RealScan G10 comes equipped with some mighty hardware ready take any challenge thrown at it. Its powerful 400MHz CPU can accomplish any enrollment, identification or authentication task without breaking a sweat. Efficient CPU enables the device to boot in less than a second and makes high speed processing of data acquisition and matching possible.

With start-up time of mere 0.57 second, this Suprema reader is one of the fastest to boot fingerprint scanners around. So, while others may be waiting their scanners to boot, you can already start capturing fingerprints. 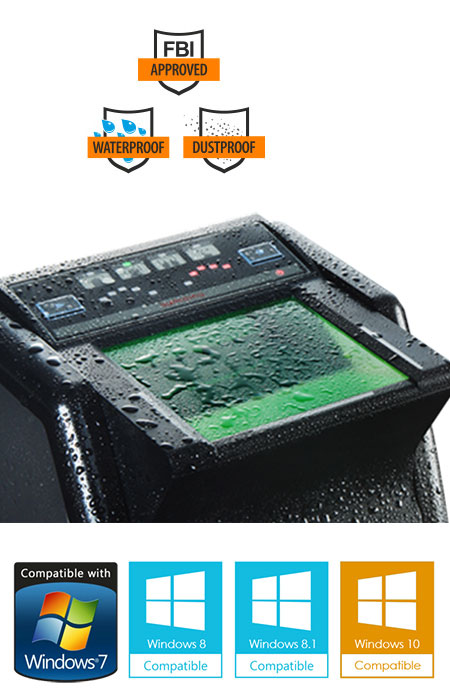 This FBI PIV certified ten-finger live scanner is made for applications that demand high level of accuracy. Being FBI Appendix F certified, RealScan G10 adheres to stringent quality requirements prescribed by the FBI, making it a perfect candidate for government, AFIS, criminal as well as civil applications.

Suprema Inc. RealScan G10 is manufactured with rugged IP54 rated dust and waterproof sealed construction to make sure that it can endure extreme environments and harsh usage. It can be used for civil as well as law enforcement applications including IAFIS, EURODAC and IDENT (USA, Japan) applications.

Suprema RealScan G10 ensures comfortable capture of fingerprints with its large size 3.5 inch platen. The scanner surface is resistant to scratches, resulting in longer service periods. It comes equipped with a modern CPU that offers processing power up to 400 MHz, ensuring faster processing.

RealScan G10 is a value for money Live Scan device compared to most other scanners in the market, thanks to Suprema’s in-house research, product development and manufacturing. Being cost effective, it can be used in deploying a low-cost setup for civil as well as background check applications.

Live Finger Detection (LFD) technology used in RealScan G10 is based on machine learning and it can detect fake fingerprints made by different material like silicone, latex, clay, film, glue, paper and more. LFD technology can distinguish dynamic image characteristics of the fake fingers from those of live fingers.