Hamster IV (Model: HSDU04P) sits in the Hamster product line up of SecuGen’s legacy products and is equipped with SecuGen’s fingerprint recognition expertise in a compact and lightweight form factor.

SecuGen’s Hamster product line is already popular in a variety of use cases and has earned a reputation for its high quality and performance. Being a SecuGen fingerprint scanner, accuracy, ruggedness, and affordability are the other characteristics come naturally to it. This versatile fingerprint reader brings SecuGen’s excellence in fingerprint recognition tech with an affordable price tag.

SecuGen Hamster IV USB scanner features Auto-On technology, which enables it to detect finger presence on the sensing area. It allows the device to save power when idle and turn on automatically as soon as finger is placed on the sensor glass.

This portable USB fingerprint reader is also equipped with an extremely rugged sensor, which can withstand harsh usage scenarios, impacts, scratches and vibrations. Its Smart Capture™ technology can scan dry, moist, aged, scarred and other difficult-to-scan fingers even in challenging environment such as high / low temperatures, direct sunlight, etc.

Hamster 4 is an ergonomically designed fingerprint authentication device, which means it is convenient and comfortable to use. SecuGen Hamster IV is compatible with popular operating systems such as Android (version 3.1 and later), Microsoft Windows (version 10, 8.1, 8, 7, Server2016, 2012, 2008 R2) and Linux.

Hamster IV seamlessly integrates with Windows Hello, the biometric authentication component of the Windows 10 operating system. There is no need to install additional fingerprint software or any other tool to make it work. SecuGen Hamster driver (SecuGen WBF driver) is also installed automatically when you connect the reader with your Windows computer.

SecuGen offers extensive documentation and support to allow software developers and system integrators to integrate Hamster IV with their third party Android, Linux and Windows based applications. It enables users to use fingerprint instead of PIN / password for improved security and enhanced user experience.

Perfect Fingerprint Reader for YOU! 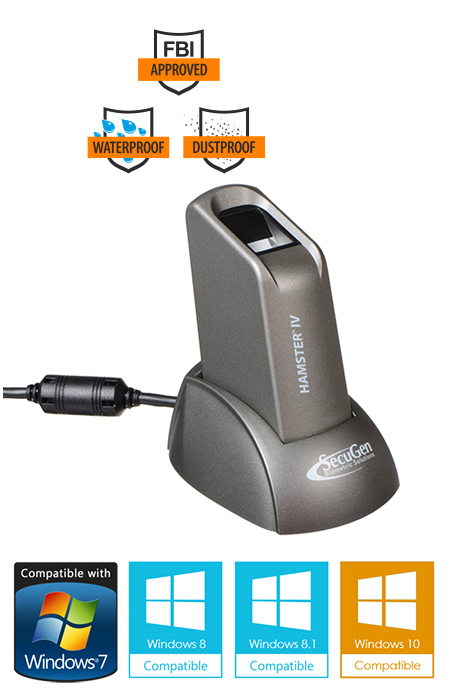 Accuracy is inherent to SecuGen sensors which stems from its patented optic design. Acquisition of distortion-free images becomes possible due to this highly advance image capture mechanism. In later stages of image processing, it becomes possible for the underlying algorithm to attain unparalleled level of accuracy due to highly precise fingerprint images. Superior quality images equates to greater precision, less false rejections and acceptances, and better overall performance.

SecuGen Hamster 4’s durability stems from the high ruggedness of the SecuGen sensor, which has an unbreakable sensor prism. Sensors give consistent high quality output even in harsh and high usage scenarios. It provides dependable performance in both indoor and outdoor conditions.

Developed and patented by SecuGen, SEIR (Surface Enhanced Irregular Reflection) optic technology allows Hamster IV’s optical sensor to scan high contrast fingerprint images with a very low rate of distortion. These types of images are considered to be best of feature extractions and matching by the recognition algorithm. Distortions beyond a level can lead to errors in matching, leading to false acceptances or false rejections.

There can be huge variations in users’ finger-skin and some of them may not be favorable for the fingerprint sensor. Keeping this in mind, SecuGen has equipped Hamster IV with patented Smart Capture technology, which allows the device to capture excellent quality fingerprints regardless the condition of finger skin.

It can capture fingerprints from hard-to-scan fingers such as dry, scarred and moist finger skin. Smart capture technology allows the device to scan fingerprints even if there is a tiny fraction of usability in it.

Left behind fingerprints are bad for your device. They become a hindrance and confuse the fingerprint recognition system during a scan, so it is important that your device has a way to avoid them unless you are okay with cleaning it after every scan.

Hamster 4 has an inbuilt mechanism to reject leftover prints as well as 2D fingerprint images, which allows Hamster 4 to avoid presentation attacks and keep up the performance. You do not have to compromise your device’s performance or security over false fingerprints, thanks to false fingerprint rejection in Hamster IV.

The Hamster IV features a sturdy, close-fitting assembly of its optic parts, which stays unaffected by day to day shocks and accidental drops. SecuGen sensors are made with a hardened material that can withstand scratches, ESD and corrosion without needing any special coating.

SecuGen offers the unmatched balance of price and features with its fingerprint recognition devices. You neither have to make compromises over brand nor on features. There is simply no trade-offs with SecuGen devices. SecuGen designs, develops and manufactures its fingerprint sensors at its in-house facility, which results in cost savings.

The benefit of cost reduction is passed to customers and that is how SecuGen is able to offer best priced devices in the industry. Despite being an affordable fingerprint reader, Hamster IV does not make any compromises with quality.

Hamster IV features SecuGen’s Auto-On™ technology. It is an automatic finger detection mechanism that can detect finger presence on the sensor surface. It makes the device to be more power efficient and allows it to turn off when not in use. However, the Hamster 4 wakes as soon as you place the finger on the sensor, thanks to the Auto-On technology.