Growing popularity of biometrics in mainstream identification and authentication has made it vitally important to ensure that the performance of biometric systems, solutions and applications rates at an acceptable level. In any system or solution, performance evaluation and metrics boost confidence of prospective adopters. Performance evaluation particularly becomes important for systems that are going serve crucial or high security applications. Biometric identification and authentication methods have been employed at various high security facilities and applications for quite a while. Governments of many countries are using citizens’ biometrics for identification, verification and distribution of government funded facilities as well as non-government benefits. This level of usage demands biometric systems, solutions and applications to be a consistent performer and requires that performance evaluation has been executed prior to the deployment. 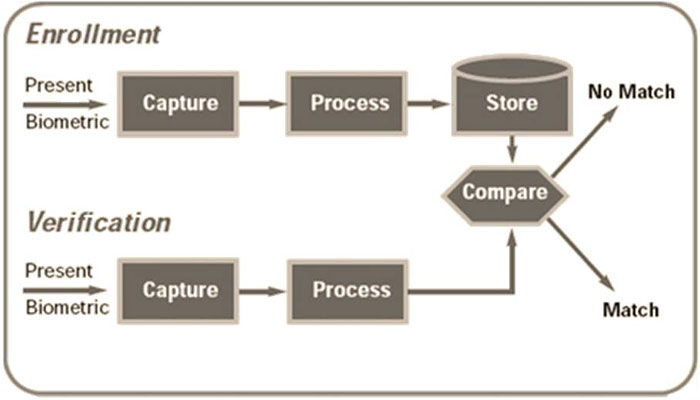 Image: Enrollment and verification in a typical biometric system

Biometric systems first require a person to establish his or her identity in the system. This process is called enrollment the person has to present his or her biometric for imaging/scanning. Captured biometrics is processed by biometric and encryption algorithms. A biometric template is generated as a result of processing, which is stored in a database and associated with identity data of that person. The procedure so far is called enrollment. Next time, when this person requires verification of his or her identity, biometrics are re-scanned, processed and the new template is compared with the existing one in the database. The matching algorithm returns a match in case of acceptance or no-match in case of rejection.

The FAR measures false acceptances by a biometric system, for example: typically, biometric systems are used to allow access to restricted areas only to authorized persons. Suppose there are two people X and Y, Y has access to the system while X has no permission. A false acceptance is obtained when X is recognized as Y (or any other person with permission) at the time of the verification by granting him permission to access reserved areas even if he or she is not entitled to it. It can be easily imagined what consequences a false acceptance can bring in, specially in a system with a high level of security, such as a military base, or a nuclear power plant.

False acceptance is an undesirable result from a biometric system. It is expressed as the percentage of instances where system will authorize an unauthorized person. For example: if FAR = 0.1% that means that in 1 out of 1000 cases, a biometric system, solution of application have probability to grant access to an unauthorized individual. In systems where the level of security is high, the existence of false positives is a serious problem; for these systems FAR = 0 is will be a desirable scenario, i.e. there should be no false positives.

How performance of a biometric system is evaluated?

FAR and FRR are most common metrics used to evaluate performance of a biometric systems, solutions or applications. During the performance evaluation of a biometric system, many genuine and impostor attempts are made to collect data of false acceptance and false rejections. Genuine attempts are attempts made by an individual to match with his/her stored template, while an imposter attempt is made to match with someone else’s biometric template. Genuine attempts help measure false rejections while imposter attempts are made to count false acceptance.

Following are other useful specification to consider while employing a biometric system:

FMR is an empirical estimate of the probability (the percentage of times) at which the system incorrectly declares that a biometric sample belongs to the claimed identity when the sample actually belongs to a different subject. During the performance evaluation, pairs of FRR and FAR (or FNMR and FMR) are calculated.

An empirical estimate of the probability at which the system incorrectly rejects a claimed identity when the sample actually belongs to the subject (genuine user).

The rate at which FMR is Equal to FNMR.

FAR and FMR are often used interchangeably in literature, so as FNMR and FRR. However, their subtle difference is that FAR and FRR are system level errors which include sample failed to be acquired or compared.

It is defined as the weighted sum between FNMR (FRR) and FMR (FAR).

Different biometric systems have different capacity to store biometric templates. Template capacity tells the maximum number of sets of data that can be stored in the system.

The time it takes for an individual to be authenticated or identified using the application.

Performance rates of a biometric system can be expressed in many ways, e.g. in decimal format (0.05), in percent (1%), as fractions (1/100) or by using powers of ten (10­2). When comparing two systems, the more accurate one would show lower FRR at the same level of FAR.

FAR and FRR are dependent on many factors including technical implementation, quality of biometrics sampled, environmental factors, etc. FRR significantly depends on user behavior and quality of biometrics presented. A person successfully enrolled earlier, may have a number of conditions at the time of verification, affecting extraction of biometric features and inhibiting verification process, for example: sticky, wet, dirty or worn out fingertips, diseased eye, hoarseness in voice, pain in arm affecting ability to signature, etc. Some of these conditions may be temporary; others can be permanent, affecting performance of a biometric system.