What is false acceptance rate or FAR?

The false acceptance rate, or FAR, is the measure of the likelihood that the biometric security system will incorrectly accept an access attempt by an unauthorized user. A system’s FAR typically is stated as the ratio of the number of false acceptances divided by the number of identification attempts. (definition by Webopedia)

What is false recognition rate or FRR?

The false recognition rate, or FRR, is the measure of the likelihood that the biometric security system will incorrectly reject an access attempt by an authorized user. A system’s FRR typically is stated as the ratio of the number of false recognitions divided by the number of identification attempts. (definition by Webopedia)

About FAR and FRR

Here, we discusses some general principles of biometric recognition systems, describes different classification errors and explains how the quality of two systems can be compared objectively. 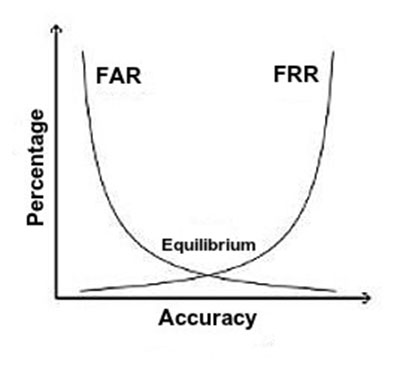 A biometric recognition system can run in two different modes: identification or verification. Identification is the process of trying to find out a person’s identity by examining a biometric pattern calculated from the person’s biometric features.

In the identification case, the system is trained with the patterns of several persons. For each of the persons, a biometric template is calculated in this training stage. A pattern that is going to be identified is matched against every known template, yielding either a score or a distance describing the similarity between the pattern and the template. The system assigns the pattern to the person with the most similar biometric template. To prevent impostor patterns (in this case all patterns of persons not known by the system) from being correctly identified, the similarity has to exceed a certain level. If this level is not reached, the pattern is rejected.

In the verification case, a person’s identity is claimed a priori. The pattern that is verified only is compared with the person’s individual template. Similar to identification, it is checked whether the similarity between pattern and template is sufficient to provide access to the secured system or area.

We uses scores (also called weights) to express the similarity between a pattern and a biometric template. The higher the score is, the higher is the similarity between them. As described in the preceding section, access to the system is granted only, if the score for a trained person (identification) or the person that the pattern is verified against (verification) is higher than a certain threshold.

In theory, client scores (scores of patterns from persons known by the system) should always be higher than the scores of impostors. If this would be true, a single threshold, that separates the two groups of scores, could be used to differ between clients and impostors.

Due to several reasons, this assumption isn’t true for real world biometric systems. In some cases impostor patterns generate scores that are higher than the scores of some client patterns. For that reason it is a fact, that however the classification threshold is chosen, some classification errors occur.

The following figures should help to achieve a better understanding of this topic. Think of a biometric verification system, which is tested with a large amount of test data. The test data consists of both impostor and client patterns. Let’s first take a look at the impostor patterns. The belonging scores would be somehow distributed around a certain mean score. This is depicted in the first image on the left side. A Gaussian normal distribution is chosen in this example.

The choice of the threshold value becomes a problem if the distributions of the client and the impostor scores overlap, as shown in the next image on the left. On the right, the corresponding false acceptance and false recognition rates are displayed.

Imagine the comparison of two biometric systems. The manufacturers of the systems just specify a single value for the FARs of them. Is this sufficient to compare both systems? The answer clearly is no, if the manufacturers do not provide the corresponding FRRs. In this case, it is possible that the system with the lower FAR has got an unacceptable high FRR.

Some effort is done to achieve large and publicly available test sets and protocols like the FERET and the XM2VTS databases for face recognition evaluation. But even if there exist some of those test sets for single biometric modalities, it still is very hard to compare systems relying on different ones (e.g. face and fingerprint).

These days there is a lot of emphasize on FAR (False Acceptance Rate). It is good that clients are getting aware of these terms and asking the right questions before implementing a solution.

However, FAR only provides half the information. When selecting a biometric solution, we need to find out what the false recognition Rate (FRR) is at the said FAR.

So when a biometric solution provider claims to have a very low FAR, it is very important to find out what is the FRR at this ‘low’ FAR. Then depending upon the application one needs to evaluate whether the FAR & FRR ratio is acceptable for the application.

In a practical scenario a low FAR & a high FRR would ensure that any unauthorized person will not be allowed access. It would also mean that the authorized people will have to put their finger on the device several times before they are allowed access.

Therefore, it is good to have a very low FAR, but please remember that if this low FAR is coming at the cost of high FAR then the solution needs to be re-evaluated.