AFIS vs. IAFIS, How They Are Same Yet Different?

Before making it to technology powered commercial applications, personal identification on the basis of fingerprints and other human anatomical features have been used in forensics and law enforcement for more than a century. Capturing human body patterns like fingerprints, ear prints, footprints, etc. from crime scenes and identification of the owners of those prints have helped law enforcement resolve crime mysteries. Fingerprints and other human characteristics have been used for identification of criminals while civil identification was served using identity documents like ID cards, badges, possessions, etc. In its initial days, identification on the basis of human anatomical patterns was mostly manual. It was a time consuming process to study fine details in fingerprints or other patterns to establish or prove an identity. With the rise of technology and connectivity, forensic applications for personal identification were greatly assisted by biometrics. It dramatically reduced time and efforts taken to establish or verify an identity.

Forensics is the birth place of biometrics. Despite its age and shift towards civil applications, biometrics is still of prime importance when it comes to forensics, law enforcement and mass surveillance applications. Human physiological and behavioral patterns collected from crime scenes are considered as a strong proof in legal proceedings. Many governments run mass surveillance programs for intelligence gathering to ensure national security and prevent terrorist activities. Face recognition, voice biometrics, gait analysis, etc. are used for remote identification in such applications.

Law enforcements and mass surveillance generates a huge amount of biometric data that cannot be processed using commercial biometric systems, which are intended to process limited numbers of records. This data is processed using specialized setup which provides adequate processing ability to process large amount of data. AFIS (Automated Fingerprint Identification System) is one of such systems, which has ability to store large amount of fingerprints records and process them. AFIS systems are typically used by law enforcement agencies to store and process criminal fingerprints. These systems can also be used for large scale civil identification as it also has to deal with large number of records.

Biometrics refer to the metrics related to the human physiological or behavioral characteristics. Biometric systems are used for automating this measurement and associating it with a user identity. A biometric system is a set of specific hardware and software. In commercial applications, biometric systems are available that can do the job independently, i.e. without the need of an external device. Hardware portion of a biometric system is designed to image or scan the biometric modality. For some modalities like iris recognition and voice recognition, biometric software can be installed on computers or smartphones. Since these devices already come equipped with camera and microphone for imaging / recording. They can capture raw biometric data and provide it to the installed software for further processing. Some external devices may already have inbuilt ability to process biometric data.

For example, banking and financial institutions leverage voice biometrics for identifying customers who use tele-banking to seek account information. During the call, voice is captured by their phone’s mouthpiece and biometric software at bank’s end matches the voice with what is sampled at the time of enrolment. If it matches, access is granted.

An AFIS (Automated Fingerprint Identification System) is a computerized system for sorting, comparing, and exchanging digital fingerprint data. AFIS is used where numbers of fingerprint records are large and processing can take a significant time. AFIS storage may contain even billions of unknown or unknown fingerprint records. When a new fingerprint is compared against existing ones, it may take hours depending on the number of records to be compared. While Biometric systems are designed for commercial applications, AFIS is used by law enforcement or security agencies to process fingerprint data. Unknown fingerprints are stored for intelligence gathering and linking different incidents. Fingerprint matching in law enforcement can be a routine task. These agencies may even have multiple comparisons to run in a day, which may increase during a particular time, e.g. any terrorist or national security incident. AFIS should have sufficient computational ability to process such requests. Fingerprint comparison against large numbers of records is a resource heavy job so AFIS uses backend computing infrastructure that improves its computational ability. Commercial biometric systems, on the other hand, do not require such infrastructure and can operate independently, since processing requests are limited. While commercial biometric systems return results as MATCH or NO MATCH, AFIS systems return top 5 or 10 closest matches. AFIS system also store fingerprint images, unlike biometric systems.

IAFIS: the AFIS of the FBI

IAFIS (Integrated Automated Fingerprint Identification System) is an AFIS, which was developed and maintained by the FBI (Federal Bureau of Investigation). It was deployed in 1999 and has been serving FBI and other agencies since then. The FBI claims to house the largest collection of digital fingerprint images and criminal history in IAFIS. IAFIS can perform automated fingerprint search, digital image storage, latent search and exchange of fingerprint data and responses. IAFIS contains millions of records of criminal, terrorist as well as civil subjects. Fingerprint data collected by other law enforcement agencies in the United States is also shared with the FBI. Data captured during criminal booking, the US-VISIT program, which is a U.S. Customs and Border Protection (CBP) management system or during employment background checks ends up to the IAFIS database. According to a report published by IB Times, the FBI has the largest biometric database of criminal as well as non-criminal subjects. 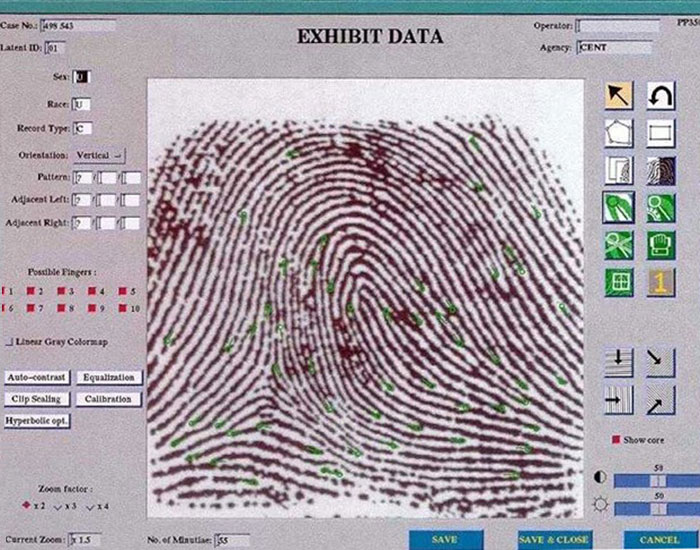 IAFIS works round the clock. FBI Claims to process around 104,000 fingerprint submissions per day with IAFIS. It holds more than 59 million criminal history records with more than 201 million criminal arrest cycles. Approximately 9,000 new records are established using IAFIS per day and around 29,000 updates are made to the criminal history file. According to the FBI, electronic submissions for civil identification get a response in 1 hour and 12 minutes while criminal fingerprint submission are processed and responded in 27 minutes on an average. IAFIS is managed by the FBI’s Criminal Justice Information Service (CJIS) division. The FBI is working on expanding IAFIS’s capabilities with a project called Next Generation Identification (NGI). While IAFIS leverages only fingerprints, NGI will also use other biometric modalities like iris, palm print and facial identification, expanding the lookup capabilities of the system.

Technology powered identification on the basis of human anatomical or behavioral characteristics, i.e. biometrics, have replaced traditional identification methods in many applications. Commercial biometric systems are good for use cases where numbers of people to are limited. For large scale identification, AFIS (Automated Fingerprint Identification systems) are leveraged. Law enforcement agencies use AFIS, which are way more capable than commercial biometric systems. Processing and comparing large number of records requires extraordinary computation ability. AFIS systems make use of additional hardware to attain this requirement. FBI’s national automated fingerprint identification and criminal history system is known as IAFIS. IAFIS has been in service since 1999, however, it is set to be gradually replaced by more advance systems called NGI (Next Generation Identification) system.