Smart Gates are set to Put Border Control on Autopilot

Border control is a crucial aspect in implementing national security. It plays an important role in controlling immigration, interdicting illegal drugs and preventing terrorists from entering a country. Thousands of illegal immigrants cross the United States border every month due to weak border controls. They use all kind of forgery to do that, fake identities, documents and passports. According to a report from the New York Times, there were nearly 409,000 recorded illegal attempts of crossing south-western border of the United States in the 2016 fiscal year. Once migrants are able to illegally cross the border, it becomes much harder to trace them and bring them to justice. Even if they are caught, they may seek asylum and process of deporting them may be expensive and take years. Anti-national elements may also cross the border posing as migrants. Once they are in, they can engage in terrorist or other anti-national activities, which can be even more disastrous than the 9/11 attacks.

Efficient border control with the help of modern recognition technology like biometrics and use of biometric entry/exit smart doors can greatly reduce the chances of misidentification or error in identification that can grant permission to a migrant trying to cross the border illegally. 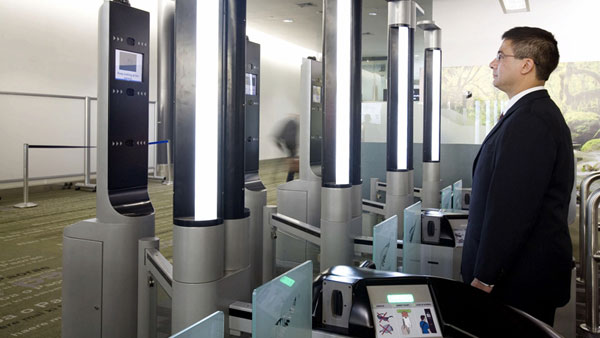 Why is border control so important?

Different countries have different policies to regulate incoming immigrants. United States is known to have one of the strictest policies to regulate immigrants and the people crossing the U.S. borders. These policies are strengthened with legal frameworks so that they can be imposed as a law. People might want to cross the border of a country for several reasons. Unstable circumstances in home country like war or civil unrest can make them move to other countries. Seek of better education or career, better standard of living, business, family reunion and sometimes pursuit of their dreams bring people to a country which offers better opportunities than their own country. Reasons like war, civil unrest, famine, etc. can force a large number of people to seek asylum in other countries. People may first try to cross borders with legal means but when they find they are not eligible, they may choose to take an illegal route.

All above reason may present a problem for the security of a country’s borders. Other than that, people with criminal or terrorist intents may also try to cross the border with legal or illegal means. They may present fake or cover identities to authorities. Identification of such elements is also a challenge to ensure the national security.

Image: Chart showing unauthorized immigrants by length of residence in the United States (left) and deportations from the U.S. interior (Right). Source: Center for Immigration Studies; The Economist

Border control is not just about the national security. Entry of unregulated immigrants can also impact the social structure. Racial, cultural, lingual and other differences and can raise cultural and religious conflicts. Syrian civil war is a good example how immigrants and refugees can impact social structure of a country hosting them. This war made several people leave the country and seek asylum in European and other nations. Many of them also entered the host countries illegally. According to a report from The Local, two thirds of the German citizens said that immigrants are causing major social problems. Since a country’s public facilities are designed and targeted for local population, a sudden rise in the number of people using them will certainly cause problems. Mass immigration puts pressure on host country’s resources and leaves local population deprived of the facilities that were actually built using their tax money. All these potential problems associated with immigration require an efficient and strong border control mechanism.

Increasing threats to the national security, espionage, entry of illegal drugs, and other anti-national activities have forced governments across the globe to implement border control. Different methods have been applied for border control and identification of people crossing the national borders. Border control operations are performed mostly by government agencies which screen and control in and out movement of people at the national borders. Border control operatives not only manage movement of people, but also screen animals and goods so that prohibited ones cannot be stopped before they pass through. Different countries implement different degree of strictness for border control depending on the travellers’ nationality or other countries they have visited. Visa fees, planned travel out of the country, possession of type of goods are other criteria that matter at the border controls.

Efficient processing of people who are looking to enter the country is one of the major challenges at border control checkpoints. Agencies often come across a large number of people to process that might affect their ability in long shifts. Scrutinizing illegal elements out of legal travellers keeping order and traveller convenience in mind is another challenge at border checkpoints. Border control officers can be prone to human errors in identification of incoming travellers and illegal immigrants may slip through their hands. Once an illegal immigrant is in, it is a tough job to track and deport him/her. So an efficient border control is the only countermeasure beforehand against several problems that may arise later. Illegal immigrants not only impact social structure but can also pose threats to the national security. Attacks of 9/11 are an example how a weak border control and errors in identification can turn disastrous.

Traditionally, identification of travellers at national borders has been done with paper based documents. Passports, identity cards and other documents are presented by people as a proof of identity. However, now more technologically advanced methods fingerprint and other biometric identifiers, biometric passport, etc. are increasingly being leveraged for screening people trying to enter a country. Immigration is mostly handled by government agencies while travel part is managed by government or private outfits. Even private airlines which operate their flights across the nations are using biometrics in collaboration with government agencies to secure national borders. Paper based identification of travellers is being replaced by biometric systems.

We come across guarded doors at airports, seaports and other border checkpoints. Guards take care of human intelligence part that is required to screen an individual’s eligibility to get through the door. These doors enable selective exit/entry of individuals. However, processes that require human intervention have higher possibility of errors than those which are fully automated. Machines can tirelessly do what they are programmed to do, unlike humans, who can be affected by several physical or psychological conditions. Performance of border control officers may be impacted by longer shifts and they may not work as efficiently during the ending hours in comparison with the starting hours of their shift. Fatigue and monotonous work may also lead to errors in identification. To err is human, and border control officers are not an exception.

Biometric smart gates can fix all above loopholes that may occur due to human intervention at border control checkpoints. Biometric smart gates verify identity against human anatomical or behavioral characteristics. It eliminates the possibility of error that can be made by a human verifier. These gates can be installed at airports, seaports, and land border crossings for screening of people and check their eligibility to cross the border. Technology firms engaged in manufacturing biometric smart gates primarily use fingerprint, iris and facial recognition methods for traveller identity verification. Other than biometric scanners, these gates may also have travel document reader to read documents like passport or visa and travel boarding pass readers integrated within the system.

Biometric smart gates are already underway deployment at various border control checkpoints. Since air travel is the most used mode to travel internationally so airports can be a busy place. Illegal immigrant may slip through the hands of border control agencies if they are still using traditional means of identity verification. Using biometric smart gates at airports make complete sense.

Following are a few real life examples of biometric smart gate deployments across the world:

Smart Gates have been deployed at Dubai International Airport for UAE residents. Travellers need to bring their Emirates ID and they can use smart gates to speed through passport controls in a matter of seconds. DXB’s smart gates are equipped with iris recognition camera to capture both facial and eye biometrics of the registered travellers. New Zealand Customs Service (NZCS) has also started deploying biometric smart gates in partnership with Morpho, which is a major biometric solution provider. The project, which initiated with Auckland international airport, is expected to deploy new and replacement gates across major New Zealand airports by 2020.

In the United States, biometric smart gates are already on pilot under CBP’s Biometric Exit program, in which the agency is working with select airlines and technology firms to identify people travelling internationally. Currently non-US citizens who are leaving the United States are being taken through biometric smart gates that use facial recognition to verify identify of the travellers. They can also read the travel documents of the passengers. The systems are deployed in partnership with technology firms like NEC Corporation of America, SITA, etc., which are major players in the field of biometric solutions. These systems captures photograph of the traveller and compares it against what they have provided to the airline. The process of identity verification on these systems does not take more than a couple of seconds and the traveller can move to the boarding area when done. The pilots are running at several US airports with future plans to expand across the other airports.

Efficient border control plays an important role in implementing national security. Scrutinizing individuals who can pose threat to a country can be of crucial importance at border checkpoints. Traditional methods have proved to be inadequate in today’s complicated world where threats may intrude national borders in any form. Traditional methods of identification like ID cards, documents, and even passports can be forged and manipulated by criminals and terrorists. Widespread adoption of biometrics in identification and authentication solutions has shown a tremendous growth in recent years. Success of biometric applications paved the way for identity verification applications at the border checkpoints like airports, seaports and road checkpoints. Biometric smart gates take it to next level by automating the whole process.

Biometric smart gates eliminate the need of human intervention for verification or identity or travel documents and automate the border control procedures. They not only make border controls securer but also process travellers with much faster speed. Biometric smart gates are underway testing at several airports of the United States and many other parts of the world and the day is not far when they will be guarding all border checkpoints around the world.