Biometric Entry Exit Screen System in Trump’s USA: Are We There Yet?

The 58th quadrennial presidential election was one of the most controversial elections in recent American history. Republicans triumphed in the election and Donald John Trump became the 45th president of the United States. The controversies, however, could not help but follow Trump as a president as well. Media nitpicked every little story it could, from his style of handshaking to his tweets; they left nothing to wonder about Mr. President. This election, from campaigning to results and beyond, became one of the most dramatic presidential elections in the history of the United States. People, who were not happy with the election results, came down to streets to rally against the newly elected president. Trump has largely been a controversial figure. His decisions like banning Muslim travellers from certain countries, building a wall on US-Mexico border, clashes with media, feminist and LGBT community has kept news channels busy. 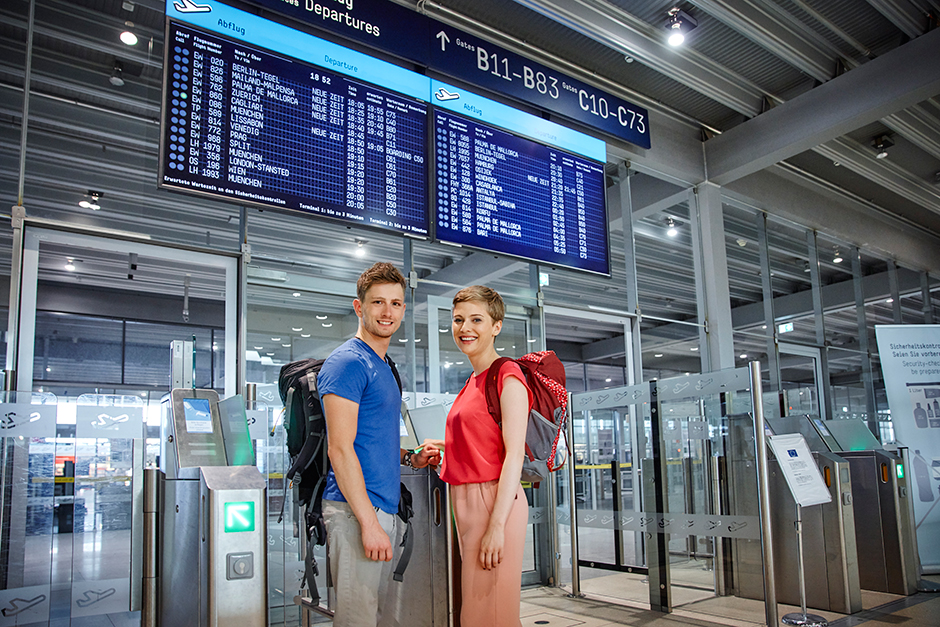 Image: A US Customs and Border Protection (CBP) Officer on Duty at a Biometric Entry Exit Screening Point

Trump’s bold statements and decisions gave him a bumpy start towards presidency but also made him a popular figure across the world. Time magazine chose him Person of the Year, with the title “President of the Divided States of America”. One of his critically controversial decisions was imposing a ban on Muslim population travelling to the U.S. from certain countries. This ban was imposed by an executive order signed by president Trump, which mentioned biometric screening of incoming travellers in one of its sections. Our intent is not to get into the details of this ban or discussing it was right or wrong. Recommendation of biometric screening of travellers is what particularly grabbed our attention. This article analyses how biometric entry-exit screening systems implementation has been holding up in Trump’s USA.

That is a reasonable question to ask when such a recommendation is made by the government to protect its borders. Biometric screening was recommended because other methods of identification fell insufficient. With biometrics, travelers cannot fake their identity. Traditional methods of identification are no more relevant in today’s environment where technology has made it possible to print high quality, genuine looking identity documents, even passports. A terrorist can print such documents, fake his/her identity and enter the country. Leaving country’s fate in the hands of traditional identification methods can result in tough lessons, even tougher than the ones learnt in 9/11 attack. So, biometrics is the only way that can truly recognize a person provided his/her identity has been pre-established.

US government already possesses a large database of terrorists and criminals with its law enforcement and security agencies. These agencies use all kind of technological advantage they have over terrorists. Terrorists, however, are now using counterintelligence to be a step ahead of the government. They know that their communication go through channels that are in government’s control and can be recorded. They understand that the law enforcement agencies may already have their biometrics so they are recruiting new people to carry out terrorist incidents. Having many of their conspiracies spoiled by security agencies, terrorists now know that technology is now being used against them, the same technology that once favoured terrorist organizations. Multiple incidents of lone wolf attacks across the globe suggest how strategy of terrorism has changed over time. Terrorists are avoiding everything that can be taped, intercepted and located with technology.

Biometric entry exit screening: how is it holding up in Trump’s USA?

(a) “The Secretary of Homeland Security shall expedite the completion and implementation of a biometric entry-exit tracking system for all travellers to the United States, as recommended by the National Commission on Terrorist Attacks upon the United States.”

This controversial executive order, however, was later blocked by court orders from various states.

Road to implementation of biometric entry exit screening system on U.S. borders does not seem practically as easy as on papers. National Commission on Terrorist Attacks Upon the United States was set up by the US government after the September 11 attacks. Among other recommendations, this commission emphasized on implementing a biometric entry exit system for people entering the United States. The need of such system, however, was originally proposed by the members of congress even before the attacks of 9/11. This recommendation was a part of immigration reforms and was not focused on counter terrorism back then. After 9/11, need of biometric entry exit systems again emerged and congress set a deadline for the implementation of the system by 2006. The congress proposed that the systems should be accessible by all agencies and not just specific units of State Departments and Homeland Security.

It has been more than eight years since the expiration of deadline for implementation of biometric entry-exit screening system and it has not happened yet. As technology is advancing at a rapid pace, eight years are more than enough to change the entire technological landscape. Earlier, biometrics was focused mainly on fingerprints, but now with technical advancements and dawn of mobile biometrics, it has gone way beyond just collecting or processing fingerprints. With behavioral biometrics, now individual profile of behavioral pattern can be created and used to identify an individual. Many of original requirements of biometric systems required for travellers’ entry/exit screening may not match with today’s technological landscape. They would either be very expensive to implement or had become obsolete in terms of today’s standards.

There is no doubt that biometrics is the future of identification but it also raises concerns of privacy and government intents on usage of this data. Increasing numbers of data security breaches have also raised concerns of biometric data security. Since a person’s biometrics cannot be changed, stealing biometric information of travellers can be disastrous. Hackers may succeed to generate the actual biometric pattern of users like fingerprints, iris patterns, voice print, etc. Though security experts often claim that this kind of reverse engineering is not possible as biometric templates are saved in encrypted form but all data security measures fall insufficient at some point in time. Hackers and cybercriminals do not delay in exploiting system vulnerabilities and possibility of getting biometric details from template data cannot be entirely overruled. Advocates of civil liberty often express their concerns about collection of biometric data of individuals as it violates the right to privacy.

Despite technological advancements in recent years, biometrics still has inadequacies to address. What is theoretically possible may not always be practical. A 2015 Homeland Security report suggests: “major physical infrastructure, logistical, and operational hurdles to collect an individual’s biographic and biometric data upon departure”. For example government may want airports to install such systems but they may not be in situation to invest in expensive biometric systems. Money has also been a major hurdle for the implementation of biometric entry exit screening. Trump’s ban on Muslim travellers and intent to build a wall on US-Mexico border shows his patriotic side but it takes much more than election slogans to make America great again. It would be interesting to see how Donald J. Trump, as a president of the United States, overcomes these hurdles and makes biometric entry exit screening systems a reality.