Ten print captures with IB Kojak can be accomplished in three steps – by scanning four + four fingers from each hand and then scanning both thumbs in one go. High speed image capture ensures that you can perform a ten-print scan in ten seconds or less.

In applications such as border control, law enforcement, humanitarian assistance, etc., 10-print scanners are commonly deployed. However, most of these devices are bulky, impeding the portability.

Integrated Biometrics has pushed the limits of compactness and portability with Kojak, and has been able to keep it unimaginably compact despite being a 10-print scanner. IB Kojak is so compact that it can easily fit into your shirt’s pocket. A glimpse on Kojak’s features and specifications is enough to give you an idea that why it is one of the most popular 10-print roll scanners around.

IB Kojak scanner comes equipped with the set of features and specification that are hard to find in a single biometric scanner. Its compactness and portability stay unrivalled among FBI certified 10-print fingerprint readers. Built with carefully chosen high quality component and technologies, this compact fingerprint scanner can easily exceed your expectations.

Ten-print scanner market is crowded with optical sensor fingerprint machines. These biometric scanners make use of TER (total internal reflection) with the help of a prism to capture the digital image of human fingerprint.

This approach requires the visible surface features (i.e. the friction ridges) of the finger skin to be in ideal condition to make it work, which is not practical all the time. Finger skin may suffer from dryness, dirt, excess moisture and have contaminants such as oil and lotion on it. In such circumstances, a traditional prism based optical fingerprint scanner will struggle to capture a usable fingerprint image. Also, these devices are bulky, heavy and impractical to carry around.

On the other hand, Integrated Biometrics uses its patented LES film-based sensing technology to read a fingerprint with Kojak. LES film contains luminescent phosphor micro particles dispersed across the film. These micro particles start to glow when the electric circuit beneath the layer is completed when a finger is placed on the sensor surface. Finger skin is conductive to the electricity and placing the finger on the LES film sensor completes the low-level electric circuit required to luminance the phosphor micro particles. It illuminates the ridge structure, which is captured using an inbuilt digital camera.

Ability to ignore latent prints on its sensing area makes it easy to operate and becomes a real time saver in high volume identification or authentication situations. Need of cleaning scanning surface after each scan can consume a lot of time collectively and becomes an extra measure to take care of all the time.

Kojak’s LES film-based sensor works on the principle of highly localized illumination of friction ridges, so it does not matter if leftover prints are present on the sensor surface or not. Kojak is naturally immune to leftover prints and can work without compromising the performance.

That is not all, Integrated Biometrics Kojak can also rule out any leftover or latent prints that may be present on the sensor surface from previous users. Leftover prints can confuse a biometric scanner as the fingerprint machine may take them for real ones if appropriate measures are not in place. Leftover print is a common issue in prism based optical sensors, which hampers the performance of the fingerprint machines based on them. This is the reason sensor surface of prism based optical sensors have to be cleaned before each scan to remove any leftover or latent prints.

Since LES film technology is based on human skin’s conductivity to complete the internal circuitry, Kojak can immediately reject any fake fingerprint attack. Fake fingerprints, spoofs, replicas or fingerprint images do not offer liveness features of human skin, so LES based sensor will not respond to these artefacts.

Despite being equipped with patented scanning tech, what makes Kojak further fascinating is the competitive price tag which gives the competition a run for its money. It comes with Appendix F, PIV, FIPS 201 and FAP 60 FBI and image certifications to ensure interoperability with FBI’s biometric data standards.

Despite being compact, Kojak nowhere compromises on convenience part thanks to the large 88.9mm x 80.01mm / 3.5” x 3.15” platen.  Users with large hands have enough room to set their fingers for a 10 print (4-4-2) scan. Kojak’s durable body comes protected against direct water spray and does not let dust or dirt creep in.

One device to meet all your live scan fingerprinting needs! 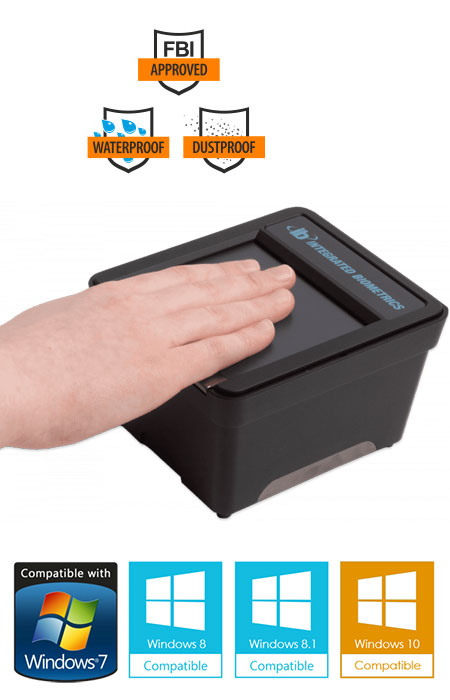 IB Kojak is designed keeping security a top priority. Kojak applies 256 AES encryption on the biometric data to ensure its security. Biometric data remains encrypted at the point of acquisition, during the data transfer / communication with external devices / applications and into the host application.

IB Kojak can work in challenging environmental condition without compromising on performance. Be it extreme temperature or direct sunlight, Kojak can scan high quality fingerprint images in all weather conditions.

Bid farewell to intimidating, bulky and power hungry 10-print optical scanners. Kojak promises to capture high quality fingerprint images while consuming a very less power. Despite being a 10-print scanner, its implausible compactness can make you double check the spec-sheet.

Kojak is an FBI certified FAP 60 10 print (4-4-2) fingerprint machine. It fully supports Appendix F 10-finger enrolment and verification, making it a perfect choice for law enforcement as well as civil applications. Kojak can perform single as well as 10-print scans at the frame rate of 10 FPS. It is also compatible for SWFT Plus enrolment.

Kojak offers a wide range of OS compatibility, enhancing its usability. With official support for Windows Desktop (both 32 and 64-bit system), Windows Server, Linux and Android, Kojak can be deployed in desktop as well as mobile applications without making any adjustments.

Kojak is easy to integrate with any third party applications thanks to the extensive support for different operating systems and highly efficient SDK (Software Development Kit) provided by Integrated Biometrics.