Integrated Biometric Columbo Desktop, as the name suggests, is a desktop fingerprint scanner. Columbo OEM Module, on the other hand, is a fingerprint module for enabling fingerprint security in third party products. It features a wide sensing area, in which even the largest fingers can accommodate easily.

Everything else may seem too big in front of Columbo’s compactness. Integrated Biometrics Columbo is the world’s smallest and lightest FBI certified scanner that produces the highest quality fingerprint images making it truly a little master in the segment.

The implausible compactness of this desktop fingerprint reader is achieved by carefully chosen component used in manufacturing. Instead of using bulky prism based optical sensor, Integrated Biometric Columbo Desktop uses an LES film based sensor technology. It enables Columbo to capture high quality fingerprint images without compromising on the compactness.

LES technology based sensor is constructed by coupling an LES film with a CMOS camera. LES film contains a layer of luminescent phosphor micro particles. These phosphorous micro particles are dispersed across the layer.

When a finger is placed on the sensor surface, a low level electric circuit is completed in LES film that causes phosphorous micro particles to illuminate. This illumination takes place exactly as the ridge structure of the finger as phosphorus micro particles are incredibly smaller (13-32μm) than the width of a friction ridge.

A CMOS camera is setup below the LES film that captures the illuminated fingerprint. This image is provided for the further processing to the fingerprint recognition subsystems.

Using LES technology based sensor automatically equips Columbo with anti-spoofing and liveness detection. The good thing with LES technology is that the LES film only responds to the human finger as it requires the capacitance of living human skin to complete the low level circuit between layers. Completion of the circuit causes phosphorous micro particles to illuminate underneath the friction ridges.

Phosphorous micro particles found in the LES film are way smaller than the width of friction ridges, that is how highly localized illumination is made possible by the LES film.

Since LES film only responds to living human skin as it requires the skin capacitance, it would not respond to fake fingerprints made out of different material such as glue, rubber, silicone, etc. It enables Integrated Biometric Columbo Desktop as well as OEM modules to offer anti-spoofing capabilities with liveness detection.

Immune to latent and leftover prints

Traditional optical sensors also face a hard time processing a fingerprint image if it has imperfections such as oil, sweat, of just a stain, even if the ridge structure is in perfect condition. This is because traditional prism based optical sensors work on the basis of digital image of visible features. The underlying algorithm is designed to work on what is visible. If there is an ink-stain on your finger, it will hinder the ability of the recognition systems to extract fingerprint features.

Prism based optical sensors capture what they “see” on the sensor surface. When there are latent prints, they capture them as well during a finger scan. Latent and leftover prints may confuse the recognition system as they take leftover prints as real ones, which results in performance related issues.

Unlike prism based optical sensors, which works by capturing the digital image of fingerprint using total internal reflection of prism, LES technology based sensors leverages an entirely different approach. Instead of capturing what is visible, LES film sensor first illuminates the fingerprint structure and then captures it with a CMOS camera. It enables Integrated Biometrics Columbo to overcome a common problem with traditional optical scanners: latent and leftover prints.

Columbo is the world’s smallest, fastest and lightest FBI PIV FAP 30 certified single fingerprint scanner. Do not let its compactness fool you. Despite being small, Columbo produces high quality fingerprint images, thanks to its patented LES technology, which can extract fingerprint features even from dry, wet and even dirty fingers.

IB Columbo is an extremely rugged single fingerprint scanner and can withstand the toughest operating environments with minimal maintenance. Columbo can endure extreme environmental conditions, which may be a usual scenario in law enforcement and military applications. 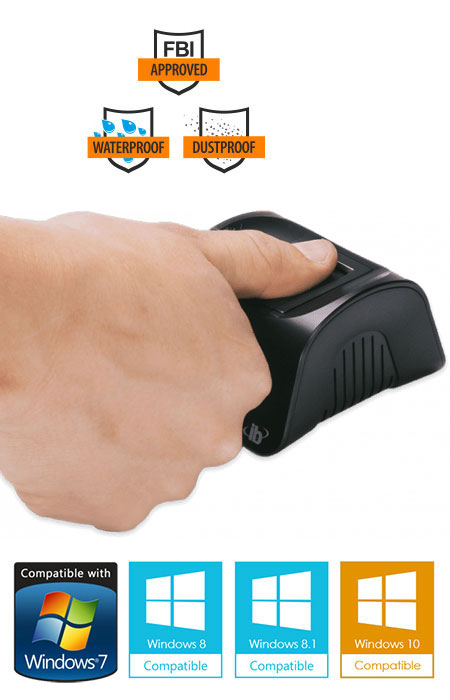 IB Columbo is an FBI PIV 071006, FIPS 201 and FAP 30 (Mobile ID) certified single finger scanner. It means that it can be used for high security mobile applications backed by the FBI. It is highly resistant to environmental challenges due to its IP65rated dust and water ingress protection, making it a suitable candidate for FBI mobile applications.

Unlike traditional optics and silicon fingerprint technologies, IB’s alternative approach to the fingerprint extraction technology makes it stand apart. LES (Light Emitting Sensor) is a patented technology developed and manufactured by Integrated Biometrics to overcome the inadequacies other traditional techniques suffer with.

Integrated Biometric Columbo Desktop weighs just 170 grams / 6.00 oz, while its OEM module weights less than 70 grams. Both the products give competitors hard time to fit these many features in such a compact and lightweight form factor.

Unlike optical scanners, which are prone to noise with latent prints on their scanning surface, LES technology entirely eliminates the need of cleaning the scanning surface, saving time and efforts in high volume back to back scanning scenarios.