Boarding passes are the green signal to enter airliners. A passenger has to possess a boarding pass along with security clearance to have access to the flight he/she booked for. Getting boarding passes should be a hassle free experience ideally, but unfortunately that is no more the case. In recent years, increasing affordability has brought airfare down and resulted in growing numbers of air travellers. Eruption of passengers at the airports has affected the quality of service airlines were known for. Getting boarding pass out of the airline counter feels like an accomplishment as airports are getting increasingly crowded. Painfully slow boarding procedures have made airports an intimidating place. Aggregate security countermeasures due to growing terrorist threats further add up to customer waiting time on top of boarding formalities. Even after so many procedures, there is no guarantee that your flight will depart on time; it may get delayed, cancelled or you may become the chosen one who is barred to board because your airline overbooked. 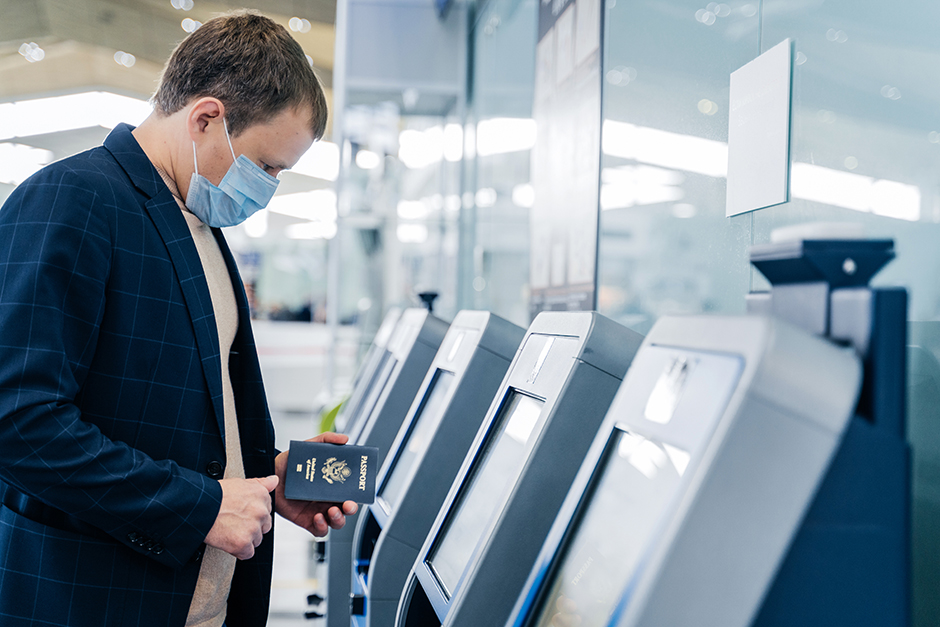 Image: a passenger interacting with self-service kiosk at the airport

Crowded, congested and chaotic, this is the first impression of most big airports as you pass the entrance door. Airports have become waiting ports. More and more people are ditching roads in favour of air travel as it becomes affordable. Due to cut thought competition among commercial airlines, there is always some kind of special discounts going on round the year. Airlines offer personalized offers as well by analysing individual travel patterns. The rise of the internet, dynamic pricing and personalized marketing have increasing awareness among people, helping airlines to bring in more customers. However, beyond the flashy and glamorous image of airlines, first encounter with an airport can be daunting, specially when it is located in a big city.

Incredibly growing waiting time has pushed airlines to brainstorm that how they can improve traditional boarding pass procedure or replace it with a more efficient method to decongest airports and speed up boarding formalities.

Though airlines are continually leveraging technology to streamline operations, there are always gaps that make the whole process less efficient. Present boarding operations require a lot of human intervention and manual process, in which an airline employee checks papers, verifies identity, checks-in baggage, etc. Human intervention claims a lot of time and leave other passengers waiting in queues, making air travel an unpleasant experience. Though airlines are constantly trying to improve travel experience for passengers, their efforts seem to fall inadequate when it comes to boarding procedures. Amid all this, there are some airlines taking up biometric technology to fill the gaps in boarding procedure.

Airports are getting increasingly populated but their ability to process passengers has not improved proportionally. Biometrics offers a futuristic approach to expedite and automate boarding procedure without the need of dedicated employees for the job. Time taken in passenger identity verification, baggage check-in and boarding pass generation, are some of the major reasons of delays in boarding process. Fingerprint biometric solution can be implemented for these use cases at the airports. They can fill the gaps in boarding procedure and passengers can be processed using these self-service biometric kiosks. Fingerprint biometrics offer futuristic solution, posing the airline as efficient and high-tech. Once passengers are comfortable with self-service biometric kiosks, time taken in boarding procedures is dramatically reduced. Self-service check-in kiosks with biometric ability can verify customer identity, generate boarding pass, print bag tags for baggage check-in and ensure peace of mind for passengers.

There are airlines around the world that have already started fingerprint biometric boarding to have their passenger a friction free travel experience. Joint efforts will lead to fully biometric boarding as well as security check-in as airport administration is also looking at biometrics to improve the security procedures. Some airlines are conducting pilot projects for fingerprint and other biometric implementation to expedite the boarding process. Jet Blue Airways and Delta Airlines have been testing biometric scanning for passenger identification at two airports of the United States, which is set to phase out boarding passes. Delta has been also testing the use of fingerprints at Ronald Reagan Washington National Airport to allow some SkyMiles members entry to its Sky Club lounges. KLM airline has already started using biometrics at Amsterdam’s Schiphol Airport.

Biometric identification of passengers at airports will not only speed travellers through crowded airports, but will also enhance security at the same time. Biometric identity is hard to imitate my people illegally trying to board a plane. It also becomes a strong countermeasure against terrorists as they use fake identities to board a flight and carry out terrorist incidents.

Airlines publish their advertisements with flashy offers and smiling faces, unfortunately, reality at the airports is just the opposite. Passengers have to go through sluggish boarding process, which leaves them waiting in queues and becomes burdensome. Along with boarding procedures, passing through security checks and boarding a flight on time has become a struggle in recent years. Failing to expand facilities and streamline operations in proportion to the numbers of passengers have left airports overcrowded and congested. The amount of margin time that has to be carried along to perform boarding and security procedure is overwhelming. In many domestic flights, it is even more than the time taken by the flight itself.

Biometric identification of passengers at airports will not only speed travellers through crowded airports, but will also enhance security at the same time. Biometric identity is hard to replicate, so listed criminals and terrorist cannot imitate others’ identity and can be immediately caught if they user theirs. Biometrics becomes a strong countermeasure against terrorists as they use fake identities to board a flight and carry out terrorist incidents. Rollout of biometrics will not only decongest airports and expedite boarding procedure, but will also enable passengers to prove identity without the need of any identity card. So failing to carry an identity card will never result in denied boarding.