Biometric Exit at U.S. Airports: Your Face is the Boarding Pass

Amid increasing threats to the air travel and need of efficient identity verification of travellers, the U.S. Customs and Border Protection Agency (CBP) has been in process of implementing biometric entry exit systems at the United States Airports. After the 9/11 attacks, the National Commission on Terrorist Attacks Upon the United States emphasized the need of such system at the borders of the country. The commission stressed that implementation of biometric entry exit system will help identify subjects that may enter the country to perform terrorist / criminal activities and pose risk to the national security. This recommendation, however, was originally proposed by the congress long before 9/11 and was a part of immigration reforms. Implementation efforts seem to have accelerated since President Trump signed an executive order that included entire section for expedited completion of this system.

After 9/11, implementation of biometric entry exit screening systems at the U.S. borders was supposed to be completed by the year 2006, as per the set deadline. Since President Trump has called for an expedited completion of the system, it is expected to give CBP’s implementation efforts some boost.

Let’s have a look how implementation efforts of biometric screening systems are holding up at the U.S. airports: 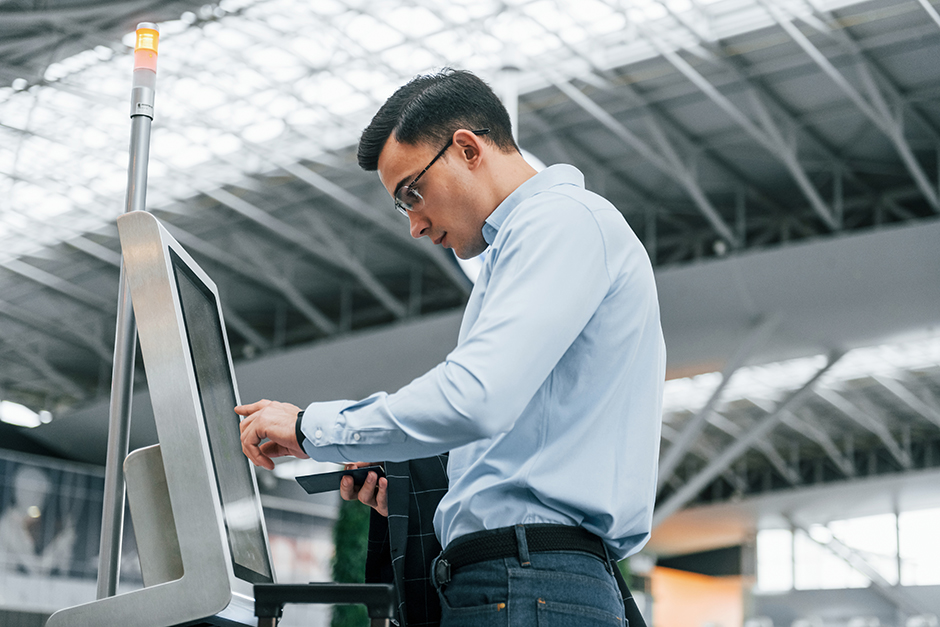 Initially, implementation of biometric screening systems at the U.S. airports was carried out with fingerprint recognition in focus; however, it now also includes facial recognition. CBP is now focusing on Biometric Exit program that will require visitors to go through facial recognition before boarding a flight. The system will register face biometric details of the visitors and will use this data for their future visits. These systems are on test pilot at several airports in the United States. Presently, only non-US citizens for international flights are being processed with these systems.

The recent pilots at departures gates of the following airports are the part of CBP’s efforts to implement the last phase of the Biometric Exit program: 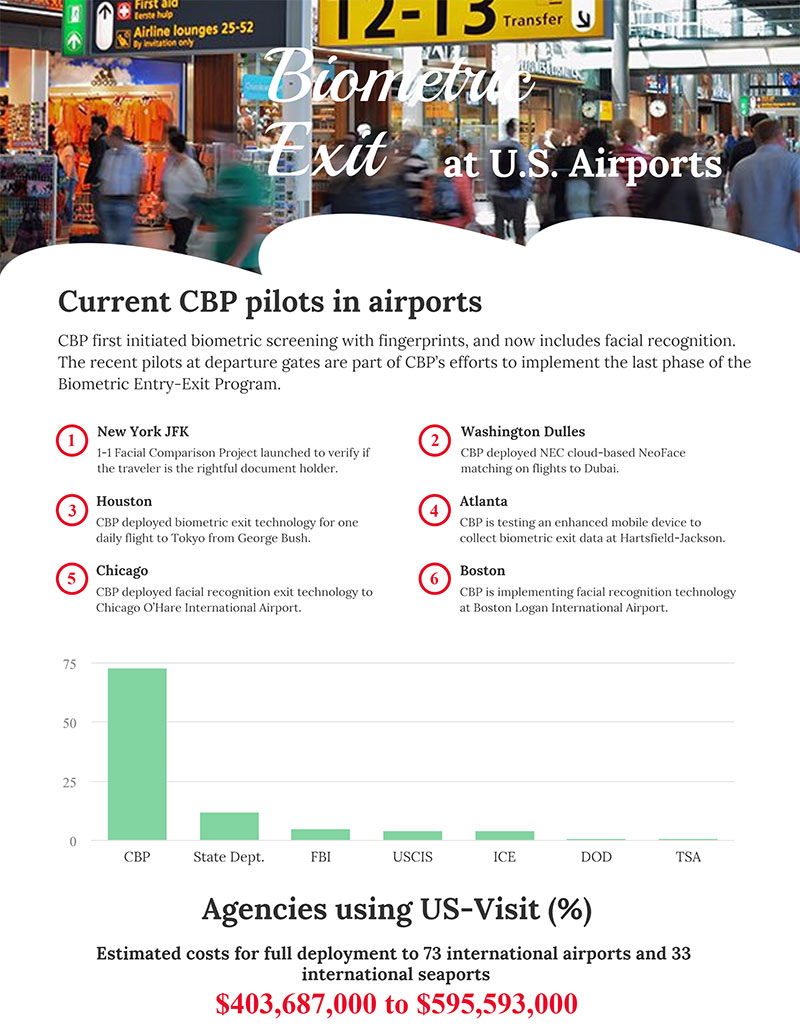 Add this infographic to your site by copying this code

Terminal Four of New York’s John F. Kennedy (JFK) is one of the airports where CBP is testing next generation Biometric Exit trial using facial recognition. This implementation is taking place in collaboration with Vision Box Inc., Delta Airlines, Inc., and the Department of Homeland Security (DHS). During the trial run, facial biometric systems will scan passengers’ facial features. These systems are able to automatically adjust to the passengers of all heights and capture a high quality image with dynamic lighting system that stays unaffected by ambient lighting within the terminal. Once image is captured, the system runs 1-1 facial comparison to verify if the traveller is the rightful document holder. These stations are implemented at automated telescopic doors that ensure a smooth, secure and sequenced automated boarding process by managing a consistent passenger flow.

CBP, in collaboration with NEC Corporation of America, has been testing NEC’s NeoFace Express device and cloud-based NeoFace matching as key facial recognition components. These systems are under trial to lay CBP’s Biometric Exit program for secure as well as frictionless exit process in Dulles International Airport. The system has been underway testing since June 2017 for flights from Dulles International Airport in Washington, D.C., to Dubai, United Arab Emirates (UAE), at a gate operated by Emirates Airlines. As a passenger step up to a NeoFace express device, it captures a photograph for comparison. If it matches with what is on file, access to boarding area it granted.

On the implementation efforts, Raffie Beroukhim, Senior Vice President at NEC Corporation of America commented:
“NEC is pleased to have participated in the Dulles and Atlanta pilots with CBP and we are glad that our technology can potentially be used to help achieve CBP’s greater missions.”

Expanding horizons of its Biometric Exit program, CBP has deployed and has been testing face biometric systems for identification and verification of travellers at George Bush Intercontinental Airport. Travellers, who are not the citizen of the United States and leaving the country, will have to go through the facial recognition system. The system is deployed for one daily flight to Tokyo from George Bush Intercontinental Airport. CBP creates a flight specific photo gallery using the flight manifest and photographs provided by the travellers to the airline. CBP compares the photo on record with the photo captured by the face recognition system to ensure that the traveller is who he/she claims to be. The system has also been deployed at Houston’s William P. Hobby International Airport as CBP announced in a press release.

Facial recognition system is also deployed at the Hartsfield-Jackson Atlanta Airport, in order to expand and test CBP’s Biometric Exit program. Delta Airline customers, who are not the citizen of the United States and travelling out of the country, are being taken through this systems for quick and secure identity verification. The system is implemented by NEC Corporation of America, which had done the same efforts at Washington Dulles International Airport. Identity is verified while travellers self-scan their boarding pass by the recognition system, which compares their live scan with the one they provided to the airline. It is made possible through a self-contained automated face recognition unit, which scans and matches passengers’ facial biometric features in a highly secure fashion.

Since July 2017, travellers on select flights have been getting their face scanned before boarding as CBP implements its Biometric Exit pilot program at Chicago O’Hare International Airport. Facial recognition makes sure that a right person gets on an international flight and undesired mid-air situations can be avoided. The system is mounted on a monopod that captures photo of departing passengers and compares it with what are on his/her documents, if details match, he/she is granted access to the boarding area.

John Wagner, the Deputy Executive Assistant Commissioner at CBP’s Office of Field Operations commented on this implementation:
“With the expansion of this technology we will be looking at different flights, airports, lighting conditions, and internal IT configurations to demonstrate to our stakeholders that this solution is flexible, reliable and easy for travelers to use.”

CBP’s Biometric Exit program using facial recognition is also undergoing testing at Boston Logan International Airport for flights to Aruba Queen Beatrix International Airport. The technology is implemented in collaboration with SITA, which is a multinational IT and telecommunication company and JetBlue Airways Corporation. While JetBlue officials brag about passenger convinces with this technology, it is in fact more about border security than convenience. With facial recognition system, it does not take more than 5 seconds on an average for a traveller to get cleared for boarding. Passengers just need to stand before a monopod installed before the boarding area gates. The system captures their photos and compares it against what is on file. If it matches, access to boarding area is granted.

US-VISIT (United States Visitor and Immigrant Status Indicator Technology) is a system maintained by the U.S. Customs and Border Protection. US-VISIT has ability to collect and analyse biometric data and is accessed by a large number of users from various government agencies. US-VISIT helps ensure security of both U.S. and international travel by analysing and identifying passenger identities and raising alerts for suspicious ones. Though US-VISIT is accessed and used by many users form federal, state, and local government agencies, it is primarily used by CBP for identity management of travellers. The agencies primary objective is to track criminals, terrorists, illegal immigrants and other subjects that may pose threat to the national security of the United States of America.

Air-travel has always been a target of terrorist incidents due to large civilian presence and limited options to respond to a mid-air situation. Such incidents make it to international news and attention hungry terrorist organizations spread their message by claiming responsibility. Biometric Exit program is on its way to ensure that no terrorist, criminals or other anti-national element can board a flight using fake identity. Facial recognition systems, which are currently on pilot for selected flights, are expected to go live at all airports in coming years. While test run is currently implemented for non-U.S. citizens taking international flights, CBP may also use Biometric Exit for domestic flights and U.S. citizens in future.  The congressional mandate of tracking non-U.S. citizens with their biometrics has suffered a slow paced implementation so far, but with Trump administration’s new directives, it is expected to gain some momentum.