Web applications have greater need of security as they are assessable from anywhere with a URL. Unlike locally installed applications, in which information systems can also be secured with physical security accesscontrol, web applications do not have this advantage.

Now with the rise of new technologies, standards and APIs, it has become to leverage other means of information security like biometrics, USB token, YubiKey, etc.

Evolution of web applications and biometrics

Early days of computing were dominated by client-server and standalone applications. Software applications were either deployed in a client-server environment or installed on the standalone systems. It was important to keep things ‘local’ back then.Locally installable applications, local network, local storage options, local processing power, etc.were the way to go.However, things were bound to change with the emergence of the World Wide Web.

When the World Wide Web started to take shape in early 1990s, it was mostly a collection of static pages. Designed mostly with the HTML, Web pages were more or less like documents that were accessible via the internet. They were nowhere dynamic or interactive as today’s web pages.When users clicked any link on the web page, the request would return to the server and reload the entire page. For example, clicking “Show more” link at the bottom of a page would reload the entire page, instead of just showing rest of the content / page. Some level of interactivity was made possible by the sequence of pages. Passwords were the digital security guards of the new-born WWW.

In 1995, when Netscape introduced Java Script, a highly popular client side scripting language, some dynamic elements could be programmed that loaded with the webpage. Java script elements could perform some actions locally instead of reloading the entire webpage on each request.

In 1999, with the introduction of Servlet Specification version 2.2 in Java and Ajax in 2005, it became possible to create more dynamic and interactive web pages. Use of Ajax techniques allowed webpages to send and receive data in the background, i.e. without reloading the entire page and distracting the user interface. This was an important milestone in the direction of web applications as they need high level of user interactivity.

As the web evolved, biometrics also evolved alongside. By 1999, biometric researchershad set some major milestones. It was the year when FBI’s IAFIS (Integrated Automated Fingerprint Identification System) became operational. Before that in 1997, first commercial, generic biometric interoperability standard had already been published. However unlike the web, which was invented in 1989, history of biometrics is more than 100 years old.

Since web based applications reside on their host server and load in a web browser when requested, it is the browser they have to rely on to access the local hardware resources as well as the external devices. So the web browser works as the mediator between the resources on the local machine and the web application.

When it comes to the web based biometrics, this ability is provided with the use of APIs. APIs are discussed in details in the section – How to integrate fingerprint scanner with web application?

Web applications work like an on-demand, online software, which can be accessed via a web browser.Users do not have to entangle in managing different aspects such as installation, minimum hardware requirements, configuration, compatibility, etc. All you need is a compatible browser and the rest can be taken care of by the service provider.

Organizations are now ditching client-server as well locally installable standalone applications in favour of web apps. Even non-business users are also choosing web applications for their ready-to-use nature. This shift is hardly surprising as web applications’ list of advantages hugely outnumber their drawbacks.

However, despite this huge shift and unprecedented growth of web apps, they still rely on passwords for account and information security.As personal as well as business computing needs shifts towards the web applications and cloud computing, biometric authentication in web applications (e.g. web-based fingerprint authentication) now makes a perfect sense.

Use of web-based biometrics to enable biometric authentication in web application offer unique advantages like:

How to integrate fingerprint scanner with web application?

These proprietary APIs are generally designed for a particular product range offered by the manufacturer, so they will not work products from the other brands. These APIs contain specific code and instructions that enables the biometric hardware (i.e. fingerprint / face / iris / other biometric readers/scanners) and user agent (i.e. browser in case of web application) to interact with each other. 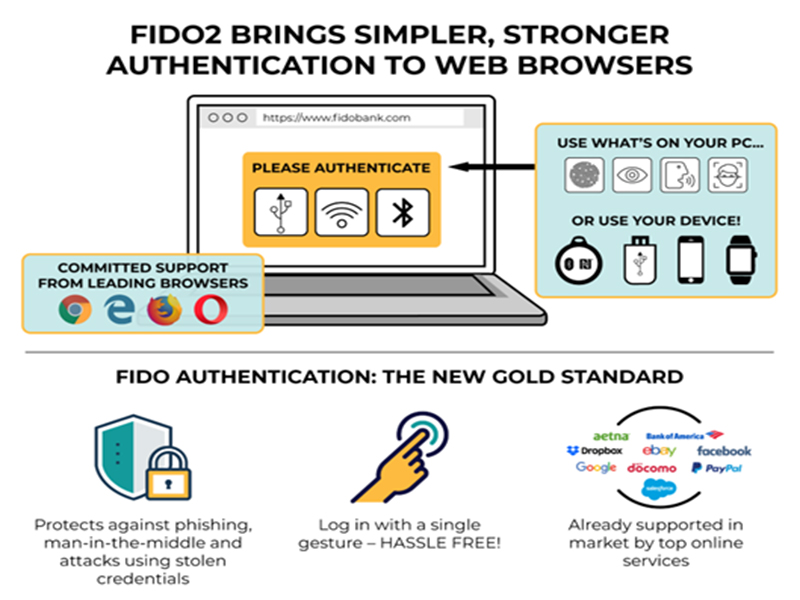 In April 2018, FIDO Alliance and the World Wide Web Consortium (W3C) announced to have a major standards milestone achieved. The new standard called WebAuthn is expected to bring stronger yet simpler web authentication to the table. WebAuthn defines how web applications can access and utilize biometric hardware (including other authentication means) and perform user authentication. WebAuthn was submitted by the Fast Identity Online (FIDO) Alliance, an open industry association that works on authentication standards and was published by W3C. This standard is backed by major corporations such as Google, Paypal, Mozilla, Microsoft, and Qualcomm.

WebAuthn defines a standard web API that can be incorporated into web browsers and related web platform infrastructure. It allows users to use new authentication methods on the web, in the browser and across sites and devices. WebAuthn aims to provide alternatives to password based authentication environment and allows users to use biometric authenticators like voice, fingerprint, USB token, YubiKey, etc. based on public key cryptography.

W3C also announced that major web browsers like Chrome, Edge, and Firefox will soon support signing into online accounts using fingerprint scanners, voice authentication, facial recognition, and so on without the need of any additional software.

How does web authentication work? 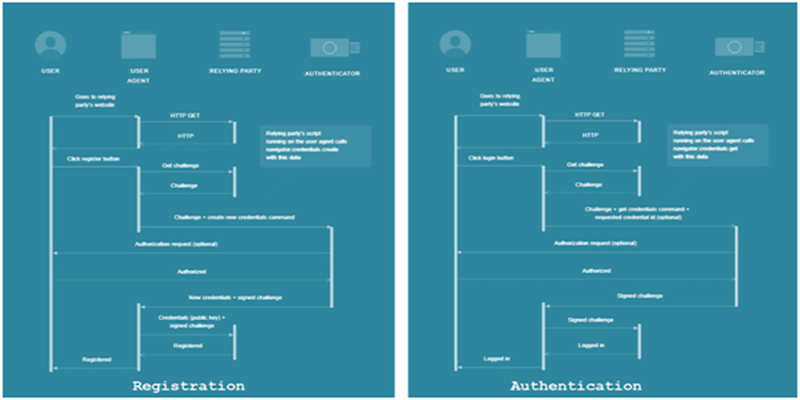 navigator.credentials.create(): When used with the publicKey option, creates new credentials, either for registering a new account or for associating a new asymmetric key pair credentials with an existing account.

navigator.credentials.get(): When used with the publicKey option, uses an existing set of credentials to authenticate to a service, either logging a user in or as a form of second-factor authentication.

Here is a sample call of the create function inside an EJS template:

Here is a sample call of the get function in an EJS template:

If users use Auth0, they don’t need to understand all the details of web authentication to use it.

Now with the inception of cloud computing,things are swiftly moving beyond web-based fingerprint systems.

Cloud computing offers processing power of cloud servers on an ordinary PC or smartphone. Even the tasks, which would have been otherwise impossible to process by a device, can be accomplished with cloud computing. With growing use, new and innovative use cases of cloud computing are emerging.

More and more services and applications are getting on the cloud and biometrics is not an exception. People are increasingly switching to cloud for their personal as well as business computing needs. This trend is evident across all business sizes: small businesses to large enterprises, which are taking up cloud to cut operational as well as maintenance cost of in-house IT applications.

People familiar with web applications available during the early days of this century, know how dramatically they have grown and captured a significant market now. It took some time for web applications to mature but finally here they are. Many web applications are now backed by enormous power of cloud servers, unlike locally installed applications, which are limited to local computational ability. Not only that, they are also backed by large technology corporation. Considering all these factors, web applications are set to even grow even more.

Now is the perfect time that web applications take advantage of biometrics and other authentication methods to eliminate friction and insecurities associated with passwords. Introduction of new standards such as WebAuthn, we may soon start to love forgetting passwords.