KYC in Banking: Why is it Important to Know Your Customer?

Do you remember the collapse of Lehman Brothers in 2008? Failure of the investment bank started a chain reaction that caused global financial crisis and eventually the government had to step-in to assist the troubled financial services firm. This single event told us that how important banks and financial services institutions have become in today’s extremely complex yet delicate economic structure.

Banks are one of the highly regulated institutions and they have to comply with the set of rules and guidelines prescribed by a governing regulatory, which is often a government agency. These regulations come in the form in strict requirement to adhere to and procedures to follow.

KYC (Know Your Customer) is one of such requirements, in which banks and other financial institutions have to adhere to certain guidelines for the verification, identification and authentication of their clients. KYC and inclusion of biometrics to improve the KYC process in banks will be our points of discussion in the subsequent sections. 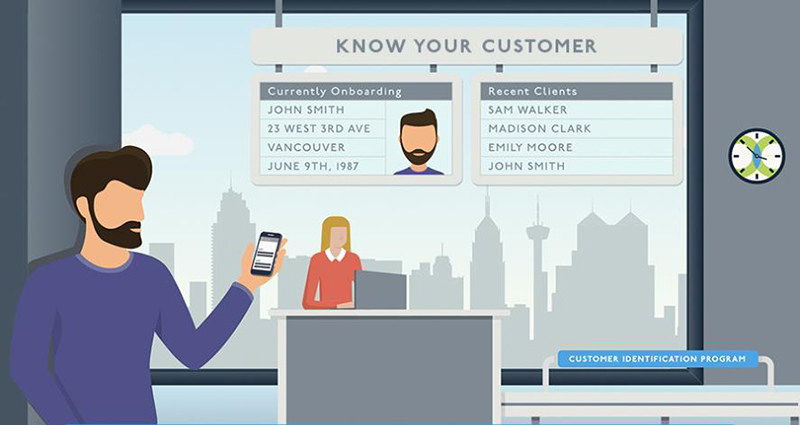 What is KYC (Know Your Customer)?

In some industry types like financial service, banking, telecom, etc. customers get access to services which can be vulnerable to misuse. For example, subscriber of a telecom company misusing his/her phone number in illegal activities or banking services being leveraged for money laundering. To overcome this issue, government agencies lay some guidelines and regulations to avoid potential misuse of services offered by institutions and business organizations. KYC is one of such requirements that banks, financial instructions and many other industry types have to follow.

KYC or Know Your Customer is exactly what the name suggests; it is the process of knowing your customer before providing them access to the services in regulated industry types.

Banks have to perform thorough investigation and identity verification before client onboarding in order to mitigate risk associated with money laundering. They do it with different levels of customer due diligence process depending on the risk profile of a potential client.

Customer due diligence is the procedure to establishing trust in a client and assessing associated risk. Customer Due Diligence can help banking and financial organizations mitigate risk presented by money laundering attempts from Politically Exposed Persons (PEPs), terrorist organizations or criminals.

Customer due diligence can be performed at three levels:

Basic due diligence: basic information obtained for all customers for identity verification and assessment of the risk associated.

What are KYC norms in banking?

Due to their importance in economic stability, banking and financial services firms are one of the highly important and regulated institutions. These institutions are not only the potential targets of fraud and scams, but also the potential channels for getting illegal or tax-unpaid money laundered. No wonder government regulators lay strict guidelines for them to operate.

Usually a superior body like a central bank, Federal Reserve, etc. sets forth the KYC norms in banking, which may differ from one country to another. In many countries, KYC can be a part of more comprehensive regulations.  For example, in the United States Customer Identification Program (CIP) is a requirement and provision of the USA Patriot Act, in which financial institutions need to verify the identity of individuals wishing to conduct financial transactions with them.

KYC norms in banking may differ from country to country, however they typically involves the following formalities:

Banks have to process KYC formalities as defined by the regulatory requirements. There may be variations how banks in a particular jurisdiction process the KYC formalities, it typically involves the following:

Importance of KYC in banking sector

Following are the reasons why KYC is extremely important in banking sector:

Can biometrics be used for KYC?

Now a days, eKYC or electronic KYC is taking over manual KYC methods, in which verification and screening of a customer used to be performed with manual methods. In the last couple of decades, biometrics has emerged as a potential solution of the problems associated with traditional identification, authentication and verification methods. Banks have to spend a lot of time and resource to verify the documents and IDs provided by a client. In some cases, accessing database of issuing authority (which is often a government agency), may not be easy, specially when you have to make manual requests.

Following are the some of the methods used for biometric KYC in banks:

KYC can be performed on a biometric recognition setup configured to scan modalities like face, iris or fingerprint recognition. KYC biometric machine allow bank employees to take the new applicants to quickly take through the otherwise lengthy and bothersome KYC process. Existing customers, who were processed with manual KYC mechanism, can also be revivified with KYC biometric machine.

KYC biometric machine connects to a biometric database of already established identities with the help of the software running on the connected computer system. Biometric KYC fetches the identity details like name, date of birth, address, etc. out of the database, and verifies against what the customer claims.

Many banks and financial services companies have already started performing KYC with KYC biometric machines or similar setup, in which customers can just have their biometric scanned to perform KYC instantly.

In many scenarios, banks and financial may have to perform on-site or remote KYC. A financial firm can also do it for the sake of customer convenience. In such scenarios, a KYC kit can be useful. KYC kit (also known as eKYC kit or biometric KYC kit) is a set of equipment to enable remote KYC.

A biometric KYC kit can consist of the following:

In remote KYC process, biometric identifiers of a customer is scanned and verified against a pre-existing database of biometric identities. If the fetch identity data post biometric scan matches with the customer’s claim of the identity, KYC is deemed done. Customer due diligence can be performed once KYC is done.

Inception of biometrically enabled mobile devices is arguably one the major milestones in the field biometric technology. Before landing on the mobile phones, biometrics had already been deployed in a wide array of identification and authentication applications. It is already on its way replacing PINs and passwords on devices like smartphones, tablets and mobile computers.

Jumio is one of such Biometric KYC app that enables online mobile payments and identity verification by performing KYC right on your phone. Jumio biometric KYC app also provides card and ID scanning and validation products for mobile and web transactions. These ID verification apps use mobile technology prowess to store identity information of physical IDs on mobile phones.

In today’s complex economy, making sure that all the money in circulation is regulated and under proper control can be an extremely challenging task. There are banks and financial organizations, where money from illegal source can be introduced to launder it. Despite the many advancement in banking processes and technology money laundering is a challenge that still exists. KYC is one of the countermeasures against money laundering and it is also a regulatory requirement in most countries.

Doing business with individuals and organizations with questionable background, financial institutions face possible fines, sanctions and damage in reputation. With the rise of biometrics, it has now become possible to verify customers biometrically and perform KYC electronically.