How Fingerprint Recognition on Next Generation Smartphones Taking a Shift

We guess nobody saw it coming. Back in 90s when people were busy flaunting their bulky Nokia and Motorola phones with tiny monochrome screen, they would not have imagined how future of these devices would look like. Phone book and message capacity were features to look at in 90s, we now talk about touch screen size, fingerprint sensor, CPU clock speed and RAM. Present day smartphones carry unbelievable hardware specifications. They come with additional hardware like sensors, front and back camera units, biometric ability (fingerprints, voice, face or iris scanning), etc., which are still not found even in a typical PC. Mobile devices have come to touch-pad keys from hardware keys and to fingerprint locks from PIN locks. Biometric authentication has been one of the hottest features in smartphones in 2010s. Started with fingerprint recognition, smartphones are now able to perform facial scan, voice recognition and iris scan. There are even devices that leverage more than one biometric recognition methods.

How mobile biometrics is holding up since its early days; why fingerprinting has become the most used recognition method on smartphones and how fingerprint matching software have improved over time, let’s have a look. 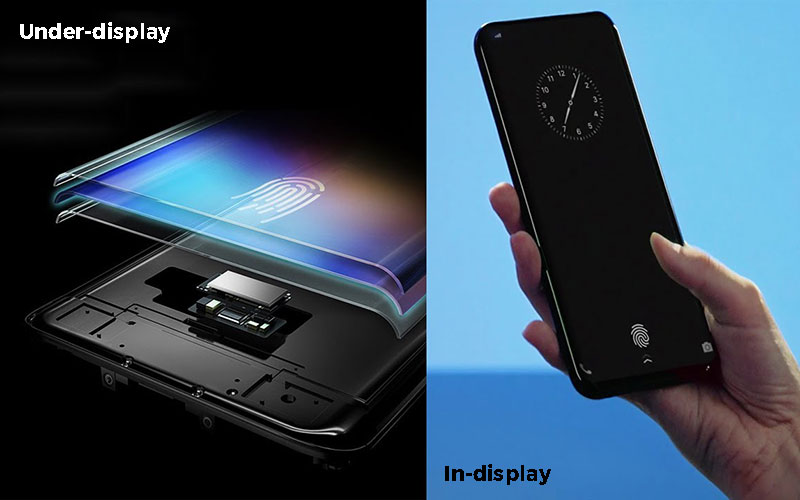 Image: Under-display and in-display fingerprint solution on a smartphone

iPhone 5s is known to feature the first successful implementation of fingerprint authentication in smartphones. However, contrary to popular belief, it was not the first mobile device to launch with a fingerprint sensor. Toshiba’s Toshiba G500 and G900 were the first devices to launch with a fingerprint sensor back in 2007. Motorola made similar efforts with its smartphone called Motorola Atrix. Atrix was more or less a half-baked attempt and was not able to stir the industry due to limited functionality of its fingerprint recognition solution and limited availability of the device. However, things quickly changed with the launch of Apple’s iPhone 5s in 2013. Apple introduced this device with its fingerprint recognition solution called Touch ID. Touch ID was deeply integrated within the operating system and was able to authenticate user identity for unlocking devices, apps as well some other transactions.

With mixed initial user responses, Touch ID was eventually a success. User liked how easily they could unlock the device and authenticate identity on apps and transactions without having to enter passcode or password. Success of fingerprint recognition on Apple smartphones made other manufacturers to put similar efforts in other platforms and introduce devices with fingerprint recognition. Apple itself included its fingerprinting solution in subsequent devices and introduced its enhanced version Touch ID 2.0 with iPhone 6s, which was claimed to be faster and more efficient than its predecessor. This trend, however, came to halt when Apple announced iPhone X in 2017. This smartphone used Face ID, a face recognition solution, instead of touch ID.

Fingerprint was the first biometric modality used on phones, however, other modalities have also been successfully implemented. Unlike fingerprint recognition, facial, voice and iris recognition can be implemented without the need of additional hardware. Iris scan can be performed using front camera of smartphones, which are now powerful enough to capture fine details of iris pattern. Same is the case with facial recognition. On the other hand, voice recognition requires a microphone to capture the voice sample, which is a readily available piece of hardware on any smartphone. In some cases, however, manufacturer can choose to leverage additional hardware over standard one, for example an infrared camera instead of visible light camera for face biometrics.

Google’s Android and Apple’s iOS are the most used smartphones platforms that capture more than 95% of global market share. Apple bakes both hardware and software for its smartphones, while Google is mainly depended on device manufacturers to develop hardware and use Android as their OS. Apple’s approach gives it more control on their smartphones as they can design and develop hardware complimenting the software. Touch ID was also implemented as a complete solution for fingerprint identification, hardware with its backing software which was deeply integrated within the operating system. This was not the case when first smartphone with a fingerprint recognition ability was launched on Android.

Later with inclusion of the feature in Android 6 via a standard Fingerprint API, it allowed third party applications developers to implement fingerprint authentication within their apps. Now when fingerprint recognition has received enough support and popularity across popular smartphone platforms, tech firms are working on new features and overcoming current inadequacies of smartphone fingerprint solutions. Ability to combat spoofing, contaminations (e.g. lotion, sunscreen, moisture on fingertips), and even underwater fingerprint matching are some of the challenges for fingerprint solution providers. Qualcomm, which is a well-known chip maker, has already demonstrated underwater and under display fingerprint scanning solution that uses Precise Biomatch Mobile Matching software, which is the industry leading fingerprint matching software. Vivo has already launched world’s first smartphone with in-display fingerprint sensor which makes user feel that finger is scanned by the display itself.

Why fingerprint is the most used modality on smartphones?

However, fingerprint biometrics, recently lost grounds to face recognition in Apple’s latest iPhone – the iPhone X. Apple launched iPhone X without the fingerprint recognition ability, a first one since iPhone 5s. iPhone X leverages facial recognition instead. Apple claimed its face biometric technology called Face ID is much more secure than the Touch ID. However despite apple’s claim there have been many cases around the world in which twins, siblings, and even friends of an authorized user were able to unlock the smartphone using their face.

Fingerprint recognition solution on present day smartphones can do much more than unlocking the device. They can authenticate identity for online services, make purchases and can even authenticate financial transactions.

You just cannot underestimate the amount of time and efforts put each day in unlocking your smartphone. It was fine if it was about unlocking it a couple of times a day, but we unlock our smartphones several times a day, to check notifications, reply texts, or may be just like that. According to a report published in The Verge, an average user unlocks his iPhone 80 times a day and this number reaches to whooping 130 times a day if we talk about heavy users. These statistics were shared by Apple in a press briefing. Unlocking your smartphone these many times a day using password or PIN can be a time consuming, if not frustrating, task. So a fingerprint scanner becomes as a viable solution to this problem. It can save time consumed in entering PINs or passwords, and their failed attempts. Some users do not set a PIN or password at all due to inconvenience it brings. For such users, fingerprint scanner can be the solution they need.

Smartphones can hold a lot of personal and sensitive data including chat and call history, personal photos, videos, contact information and financial data. Access to this data can be secured with a fingerprint scanner and every time you handover your device to someone else, you can be sure that your personal would not be accessed, even accidentally. This can be particularly useful in case of banking and financial apps. These apps can be locked with fingerprints, which will make sure that they are safe from an unauthorized access even if the device is lost or stolen in an undesirable event.

Present day smartphones are no more just communication or media consumption gadgets, they are going hand in hand with computers when it comes to productivity. Due to the diminishing boundary between smartphones and computers, many businesses allow personal devices at work, enabling employees to use corporate resources and their personal devices to be more efficient and productive. BYOD or Bring Your Own Device is the name of the policy laid to regulate personal devices using workplace resources. While this is a great idea, it also presents corporate network security risk. Fortunately these risks can be easily mitigated with the use of fingerprint authentication. Fingerprint login makes sure that only authorized user is accessing the network and not an imposter with stolen or guessed credentials.

Smartphones have grown to make their own segment. They are not as dumb as feature phones nor they are as powerful as computers, but they get most of daily stuff done, which required to be done on a computer in the past. Biometrics has shown significant progress in 2010s and multiple biometric modalities like fingerprint recognition, iris scan, facial and voice recognition, have been already implemented on smartphones. Fingerprint recognition has particularly shown great progress and has become the most used biometric modality.