Security of sports persons, spectators and other people present at the sporting events has always been a major concern for organizers. When it comes to large international sporting events such as Olympic Games, FIFA World Cup, etc. security risk increases multi-fold. Large sporting events have been a target of terrorist threats and crimes. Security of these events is becoming more and more challenging due to increasing numbers of possible threats and use of technology.

Biometric recognition is now increasingly leveraged for implementing physical security. It is also changing the way people are identified at sporting events. In major upcoming sporting events like FIFA world Cup 2022 and Olympics 2020 (Tokyo 2020), face recognition is going play a vital part in overall security of the events.

Gathering of a large numbers of people automatically becomes a potential target for criminal and terrorist incidents as a single incident can wreak havoc and cost several lives. Since these two sporting events get intensive media coverage, any incident instantly becomes international news. Terrorist organizations can target these events to raise their voice and demands. So security becomes a crucial requirement for large sporting events like FIFA World Cup and Olympics.

Olympics and FIFA security threats and incidents in the past

International sporting events are a way for nations to win without engaging in wars. However, due to their importance, media coverage and large numbers of spectators, they are always a target for disrupting acts like criminal or terrorist activities.

Following are the security incidents that have taken place in large sporting events in the past:

Russia hosted the FIFA World Cup 2018 – the 21st edition of the event, at 12 different venues located in 11 major cities. Though Russian President Vladimir Putin assured for a safe and secure event, security experts were concerned considering Russia’s involvement in the Syrian civil war against the terrorist organization ISIS.

The sporting event was the highest possible spot for terrorist incidents considering its size, different locations and global spectators. Pro-Islamic State media platforms had already launched an unprecedented social media campaign calling for attacks on the tournament. The country was already dealing with numerous terror attacks that had taken place in recent years. Despite the unprecedented level terrorist threats and social media campaigns from the terror organization, the event took place successfully.

Chief of Russia’s Federal Security Service reported that they were able to prevent an attempted drone attacks as well as attacks on supporters during the FIFA World Cup 2018. Russia used thousands of police officers along with cutting-edge surveillance technology at the World Cup 2018.

“Took measures to detect and foil attempts by terrorists to use drones during the preparation and hosting of various major political and sports events, most of all during the soccer World Cup.”
Alexander BortnikovHead of Russia's Federal Security Service

During the 1996 Summer Olympic Games, a bombing incident took place in Centennial Olympic Park in Atlanta, Georgia. This incident was considered to be an act of domestic terrorism, which resulted in two fatalities (one indirect) and injured several people. Thousands of people had gathered in the Olympic Park for a concert due in late hours.

During 1972 Summer Olympic Games, which were hosted by Germany, eleven members of the Israeli Olympic team were taken hostage by a Palestinian terrorist group. The incident is known as the Munich massacre as the hostages were later murdered along with a West German police officer. The terrorist group found the Olympic Games an easy to target spot to target and raised the demand of releasing 234 prisoners. An attempt was made to rescue the hostages by the police, which failed.

Facial recognition and its relevance in large sporting events

Thousands of people can gather in large sporting events including athletes, support staff, media persons, and other officials. Security of such sporting events can be extremely challenging, primarily due to their size. One crucial requirement in the sporting events of large sizes is so keep everyone in identified state. It is traditionally done with manual verification and issuing different types of badges that allow access to different levels in the event. Badges, however, can be easy to manipulate or even counterfeit. Facial recognition of all individuals entering in the sports arena is a potential solution.

Following are some of the reasons why facial recognition is the most relevant tech for security in sporting event:

Brazil has used face recognition in FIFA World Cup 2014. The tournament was held at eighteen locations in the country and without technology assisted security, it would have been hard to ensure security. The Brazilian government invested more than $900 million to ensure security of players, staff members and fans. Face recognition enabled the authorities to spot identified troublemakers, criminals, and terrorists.

The 2020 Summer Olympics are scheduled to take place from 24 July to 9 August 2020 in Tokyo, Japan, making it the first Asian city to host the summer Olympics twice. Japan has already hosted three Olympic Games. The Metropolitan government of Tokyo has allocated a fund of 400 billion Japanese yen (over 3.67 billion USD) to cover the cost of hosting the Games.

From increasing slot capacity at major airports to laying new railway line and renovation of major stadiums and the Olympic Village, Japan is leaving no stone upturned for a successful organization of Olympic Games.

Security has always been a crucial aspect in major sporting events and Japan seem to take no chance on security of athletes, staff, delegates as well as fans. The sporting event of the size of Olympics attracts spectators around the world, making security more challenging. 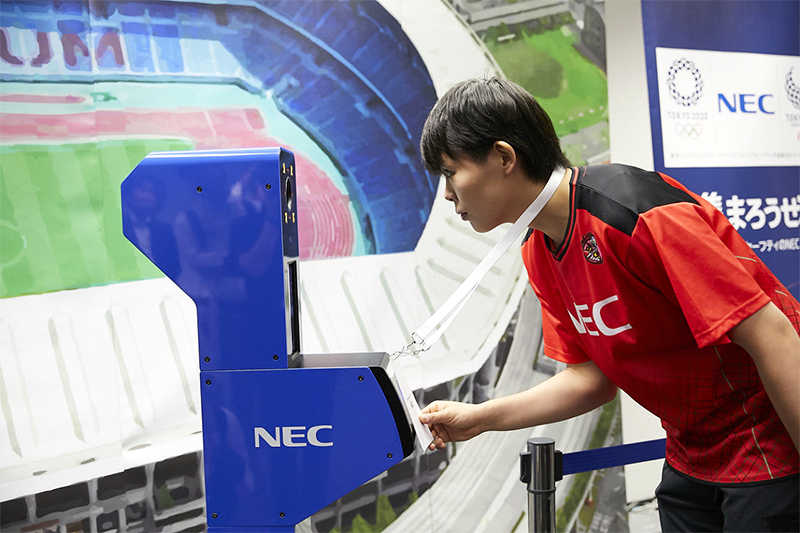 Image: NEC demonstrated its facial recognition Olympic security systems, which will be deployed at Tokyo 2020 Olympic and Paralympic venues for identity verification with face scan.

The Tokyo Organizing Committee of the Olympic and Paralympic Games (Tokyo 2020) has announced that identity verification of athletes, officials, other staff members and media representatives will be performed using biometric facial recognition technology. This is be the first time that facial recognition will be used at this scale in Olympic Games.

In August 2018, the Japanese electronics giant NEC announced that it will provide large scale face recognition systems for security in the Olympic and Paralympic Games – Tokyo 2020. These specialized face recognition Olympic security systems will be used for identity verification of athletes, media representatives, volunteers, and other staff. These systems have been developed in partnership with Intel and are powered by Intel’s highly efficient processers.

These large large-scale face recognition Olympic security systems will make use of NEC’s proprietary technology called NeoFace which is powered by Artificial Intelligence technology. NEC will store the facial details of over 300,000 people on an IC card to be carried by accredited people.

“Facial recognition improves security and efficiency by being able to confirm a picture ID against the face of the person seeking to enter a facility with greater speed and accuracy than human staff.”
NEC

FIFA World Cup will use face recognition system for security

Not just in the Tokyo 2020, face recognition technology will also be playing its part in the 22nd edition of the FIFA World Cup, which is scheduled to take place in Qatar in 2022.

NtechLab, a Russia based firm that develops AI and deep learning powered face recognition technology, is currently in talks with the International Football Federation (FIFA) and the Qatari authorities to deploy its face recognition system for security in FIFA World Cup 2022.

“We are negotiating with FIFA and Qatar, we will participate in a pilot project. We are waiting for a decision based on its results at the beginning of next year. We have been working with them for more than a year, this is a complex process. We have great advantages, as we recognize faces regardless of race, there was also a successful experience in working with FIFA at the World Championships in Russia.”
Alexander MininCEO, TASS

The FindFace Security technology was developed by NtechLab and introduced by the Rostec state corporation in several cities to conduct face recognition during FIFA World Cup 2018. It allowed authorities to detain more than 180 people from offender databases and some of them were already on the federal wanted list. At the time of the World Cup, about 500 city surveillance cameras, the underground, stadiums, fan zones, as well as mobile biometric complexes serving mass events were connected to the face recognition system in several regions.

Large sporting events attract fans, sports persons, media representatives, experts from various fields as well as many other staff members who directly or indirectly associate with these events. People even travel overseas to get involved. Olympic Games and FIFA world cup are the two of the biggest tournaments organized on the planet. But larger the sporting event, greater the risk it carries.

Use of face recognition in FIFA and Olympic security systems has emerged as a powerful tool, which can automatically identify individuals on surveillance and alerts security agencies before they are able to pass the security checkpoint. It gives authorities a chance to identify threats in advance, without disturbing the sporting event. As of now, face recognition is used alongside other technologies as well as traditional ways of implementing security; however, the day is not far when face recognition alone will work as the main component in FIFA and Olympic security systems.