Gun control is a highly sensitive and controversial topic in the United States. People who favor the idea of keeping a gun offer arguments such as constitutional rights and personal safety, while people opposing this idea show statistics of gun violence in the country that has claimed the lives of several people each year.

The United States has maintained its permissive stance so far in its firearm guidance policy. However, the country also keeps tightening its laws bit by bit to regulate how guns can be manufactured, imported, transported, traded, possessed, and used within its jurisdictions.

This article talks about gun control, regulations surrounding it, and the gun control arguments often offered in its favor as well as opposition. 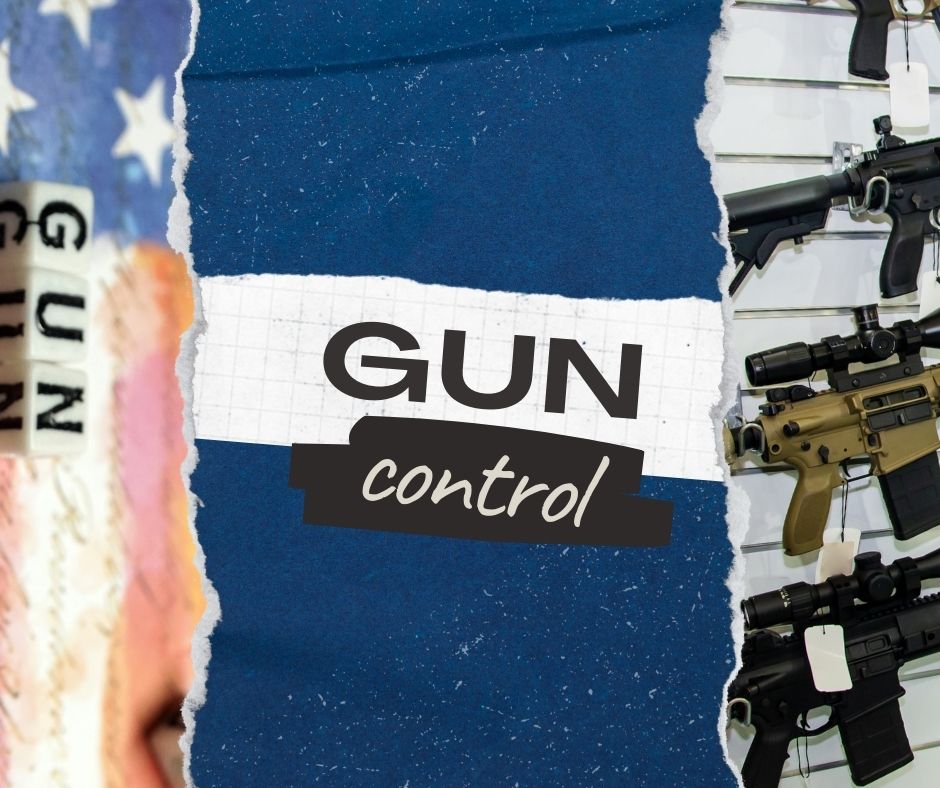 Image: Gun control is a highly controversial topic in the United States (representational).

NFA (National Firearms Act) – currently codified and amended as I.R.C. ch. 53, is an act enacted to tighten gun control by mandating the registration of guns (and other firearms) and imposing excise duty on the manufacturing and transfers of firearms. NFA was enacted in 73rd Congress, Sess. 2, ch. 757, 48 Stat. 1236 on June 26, 1934. The National Firearms Act -NFA is Title II of U.S. federal firearms laws.

NFA imposed a $200 tax on the transfer of firearms, which currently translates to a little less than $4000 if we take inflation and other factors into account. Due to the imposition of a heavy tax, NFA was considered quite restrictive at that time. Surprisingly, the tax amount ($200) has not changed even after 84 years (as of January 2022).

Initially, NFA was imposed on firearms including pistols and revolvers, but they were eventually excluded from the NFA imposition. Concealable weapons, however, remained on the list.

The U.S. federal law – Gun Control Act of 1968 was enacted in order to regulate ownership as well as the trades/transactions, manufacturing, imports, etc. related to firearms. This act became law on October 22, 1968, when President Lyndon B. Johnson signed it. The Gun Control Act of 1968 is primarily focused on inter-state commerce of firearms, allowing only licensed manufacturers, importers, and dealers to run interstate trade of firearms.

“A well regulated Militia, being necessary to the security of a free State, the right of the people to keep and bear Arms, shall not be infringed.”
A declaration in the Second Amendment of U.S. Constitution

It is a fundamental right of U.S. citizens to own firearms. The history of the right to keep and bear arms in the United States dates back to the colonial era and the gun culture that stemmed from its frontier expansion and revolutionary roots. This fundamental right to keep and bear arms is argued every time an incident of gun violence takes place.

Advocates of gun control want more and stricter gun control regulations and even a ban on guns. They come up with the number of fatalities that have occurred due to people’s right to keep guns.

Proponents of gun rights and milder gun control offer an argument that it is a constitutional right of the people to keep and bear arms. They would also tell you that it is essential to have guns in order to ensure self-defense. At times, the government does tweak gun control regulations in order to make them stricter post major gun violence incidents.

However, the restrictive measures have raised great concern among barrel enthusiasts. Their main mouthpiece was the National Rifle Association (NRA), one of the oldest (founded in 1871) non-partisan and non-profit organizations to defend the rights of arms owners and dealers. Today it has nearly 5 million Americans.

With the lobbying and political connections, NRA has successfully blocked nearly all attempts to restrict the Americans’ ability to buy weapons. In the mid-1990s, the association got the US government’s Centers for Disease Control and Prevention (CDC) to effectively cut funding to research firearms.

Because of NRA lobbyists, the Bureau of Alcohol, Tobacco, Firearms, and Explosives (ATF) was never able to acquire an electronic database of gun owners – all information about them is still stored on paper.

The confrontation between supporters and opponents of weapons entered a new phase with the presidency of Barack Obama. At the end of his first term, there was a tragedy at Sandy Hook Elementary School, and so he began his second term by fighting against the gun lobby.

In January 2013, the President proposed to Congress the approval of a package of measures to ban the sale of automatic rifles; limiting the volume of stores to ten cartridges; verification of the identity of the buyer. The last point was the most popular among Americans, but in the end, none of the three initiatives were approved.

The presidential plan met with fierce resistance from the Republican opposition in the House of Representatives. Together with most Republicans, who traditionally receive financial aid from the arms lobby, these measures were opposed by several Democrats from the American hinterland, where conservative sentiments are still strong.

Proponents of gun rights’ main argument are – “Guns don’t kill people,” and there is no evidence that restrictive measures will inevitably lead to fewer gun deaths. Statistics show the opposite: in those states where the laws are more severe, there are fewer victims of firearms, and vice versa.

The weaker the regulation, the more people are killed by bullets. However, any, even the most insignificant, attempts to restrict the right to arms, in the opinion of the conservatives, look like a violation of the Second Amendment.

A year before the end of his presidency, Obama described his unsuccessful attempts to amend parts of US legislation regarding access to lethal weapons as his main disappointment. According to him, Americans are one of the most advanced people in the world, which at the same time does not have “common sense firearms safety laws despite repeated mass killings.”

On APRIL 07, 2021, Biden-Harris Administration announced a number of initiatives to tighten control over the circulation of firearms. President’s executive order on gun control came in the wake of two recent mass shootings incidents in Boulder and Atlanta.

The President addressed the country from the White House Rose Garden while announcing this executive order gun control. Anticipating his address, US Vice President Kamala Harris stated that, in the opinion of representatives of both parties, the time has come to take practical legislative measures to tighten arms control. She also noted that Joe Biden made efforts to address this issue during his tenure as a legislator.

He also pointed out the need for a complete ban on assault weapons as a part of this executive order gun control. Biden said it is imperative that the federal gun control laws prompt states to pass their own laws to that effect. During his speech, the president announced what a White House spokesman, at a briefing later Thursday, called the executive’s initial set of arms control actions.

This includes, inter alia, new investments in special programs for communities that are particularly vulnerable to gun violence. In addition, the president intends to tighten restrictions on the distribution of firearms without serial numbers, which are difficult for law enforcement agencies to trace.

Another initiative concerns firearm safety brackets. In a previously published document, the US administration emphasizes that such devices can make firearms more stable and accurate, but will not interfere with concealed carry.

In his speech, the president described the violence with the use of firearms as an “epidemic” for the country. Stressing that the time for prayer is over and the time is ripe for action, Biden called on to approve three senate gun control bills already approved by the House of Representatives. The President noted that the priority task for him will be to deprive weapons manufacturers of legal immunity.

The Ministry of Justice also plans to present a template of the law that will allow relatives and law enforcement officials to apply to the court with a request to temporarily restrict access to weapons for a person whom they consider dangerous to themselves or others. The template is intended to provide a starting point for the development of relevant laws at the state level. 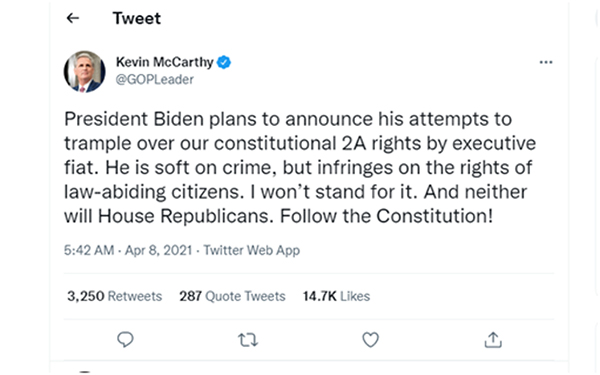 It is also proposed to draw up an annual report on trafficking in firearms and conduct a number of public events to combat violence. Biden plans to appoint former federal agent David Chipman as head of the Alcohol, Tobacco, Firearms and Explosives Regulatory Authority.

Chipman spent 25 years in this department and was involved in the investigation of the bombings at the World Trade Center of New York and the federal building in Oklahoma City in the 1990s. He is currently a consultant to the Giffords organization, which advocates tighter gun control.

“He is lenient towards criminals but infringes upon the rights of law-abiding citizens. I will not tolerate this. And so are House Republicans. Observe the Constitution! “
Kevin McCarthyMinority Leader of the United States House of Representatives

In contrast, Everytown for Gun Safety President John Feinblatt praised the administration’s proposals, especially with regard to weapons without serial numbers, saying it would save countless lives.

“We are delighted to hear from the administration that today’s action is just the beginning and look forward to continuing to work closely together to end gun violence in this country.”
John FeinblattPresident of Everytown for Gun Safety

The United States is one of the three nations (the other two being Mexico and Guatemala) where the right to bear firearms is a constitutional right. While this right to keep and bear guns may give people a sense of security, it has also resulted in a number of incidents where these firearms were used for gun violence. Mass shootings of the 2000s and 2010s shocked the entire country and proponents of more gun control demanded stronger measures.

Firearm manufacturers as well as the supporters of the right to bear firearms, however, have a strong lobbying ability that hinders the government to introduce harsher gun control laws.  People are now looking at Biden Harris gun control efforts whether they do make a difference or just become the same political ritual repeated after every incident of gun violence in the country.