Biometrics technology is based on the principle of measuring and examining the biological traits of individuals, extracting the unique features from this acquired data and then comparing it with the template set stored in the biometric templates database. These unique biological traits are called biometric identifiers and can be of two types – physiological and behavioural.

There are three main components in the security of a system – authentication, authorization and accountability. Authentication is the most fundamental of these three components because an individual needs to be authenticated first before he can access the system. Conventional authorization systems use passwords, smartcards etc.

The main reason for selecting biometric technology over the traditional identification techniques such as the username/password systems is that traditional methods are too vulnerable to security breaches and simply do not provide sufficient security in today’s connected and data driven world. Password or token based systems provide access based on evidence of ownership or proof of knowledge. This is not really sufficient as tokens and passwords can be stolen by a variety of techniques.

Biometrics is unique in the sense that it based on the inherent characteristic of the individual. It authenticates the user based on who they are as opposed to what they know or what they have. Another advantage of biometric identifiers is they cannot be guessed, forgotten, misplaced or easily forged unlike the knowledge-based and the possession-based identification schemes.

When selecting a biometric trait for use in a particular application, the biometric trait is assessed on the following seven features. A biometric modality should possess these seven qualities in order to provide high performance and accuracy in biometric identification systems.

What are unimodal and multimodal biometric systems?

What are the limitations of unimodal biometric systems?

The following are the limitations of Unimodal biometric systems:

Susceptibility of the biometric sensor to noisy or bad data: The captured biometric trait might be distorted due to imperfect acquisition conditions. This limitation can be seen in applications which use facial recognition. The quality of the captured facial images might get affected by illumination conditions and facial expressions. Another example could be in fingerprint recognition where a scanner is unable to read dirty fingerprints clearly and leads to false database matches. An enrolled user might be incorrectly rejected whereas an impostor might be falsely accepted.

It might not be compatible with certain groups of population. Fingerprint images might not be properly captured for the elderly and young children because of faded fingerprints or underdeveloped fingerprint ridges. Though the biometric traits are expected to exist among every individual in a given population, there could be some exceptions where an individual is unable to provide a particular biometric. For example, iris images might not be acquired if the subject has a pathological eye condition.

Within a large population, unimodal biometrics is prone to inter-class similarities. Facial recognition may not work correctly for identical twins as the camera might not be able to distinguish between the two subjects leading to inaccurate matching

Unimodal biometric systems are quite vulnerable to spoof attacks where the data can be imitated or forged. For example, fingerprint recognition systems can be easily spoofed using rubber fingerprints.

Multimodal biometric systems merge two or more biometric technologies such as facial recognition, fingerprint, iris scanning, hand geometry, voice recognition etc. These systems take input from single or multiple sensors for measuring two or more different biometric characteristics. A system combining face and iris characteristics for biometric identification is considered a multimodal system irrespective of whether the face and iris images were captured by the same or different imaging devices. Also, the measures need not be mathematically combined in anyway. An example of this would be a biometric system which combines fingerprint and face recognition. This system allows users to be verified using either modality.

In addition to improving the recognition rate, combining two or more biometric modalities might be more appropriate for different applications. Another reason might be simply customer preference.

How do multimodal systems work?

Given below is the block diagram of multimodal systems.

In multimodal biometric systems fusion is achieved by running two or more biometric traits against two or more different algorithms which is then used to arrive at a decision. This kind of a technique proves to be extremely useful in situations such as a large scale civil ID scenario, where the identity of thousands of people need to be authenticated at one time. Also, having an additional method of verification overcomes the possibility of inconvenience which can be caused by the malfunctioning of the primary biometric input.

The various types of multimodal biometric systems are discussed below:

These systems take a single biometric sample from a single sensor and then process it using two or more different algorithms.

These systems use one or more sensors to capture samples of two or more different samples of the same biometric trait. An example of this could be a system capturing images of multiple fingers.

These systems use two or more distinctly different sensors to capture the same instance of a biometric trait. These captured samples are then processed using a single algorithm or a combination of algorithms. Example of multi-sensorial biometric systems is where the same facial image is captured using a visible light camera and an infrared camera fixed with a particular frequency.

We use more than one biometric modality in multimodal biometric systems and hence we have more than one decision channels. Thus arises the need to design a mechanism which can combine the classification outcome from each biometric channel and this mechanism is known as biometric fusion. This fusion combines the measurements from different biometric attributes to enhance the strengths and decrease the weaknesses of the individual measurements.

Given below is a diagram showing the fusion levels in a multimodal biometric system. 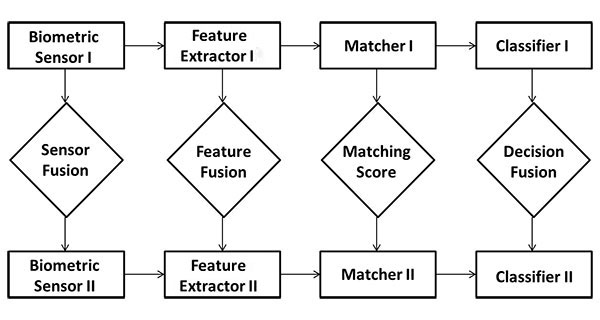 In sensor level fusion, we fuse the biometric traits coming from different sensors such as fingerprint scanner, iris scanner, video camera etc. to form a merged biometric trait and process.

Features contain richer information of biometric traits as compared to matching score or decision of matcher and thus fusion at the feature level provides better recognition results. It has also been observed that feature level fusion provides more accuracy when the features of different biometric modalities are compatible with each other.

In this fusion level, the feature vectors are processed separately rather than combining them. Then an individual matching score is found and based on the accuracy of each biometric channel, we then fuse the matching level to find a composite matching score which will be used for classification. We can use various techniques such as logistic regression, highest rank, Bayes rule, mean fusion etc. to combine match scores. In addition to this, another important aspect of this fusion is the normalization of scores acquired from different modalities. We can use techniques such as Min-max, z-score, piecewise linear etc. to achieve normalization of the match scores. Matching score level fusion has lesser complexity than the other fusion levels and hence it is widely used.

The accuracy of a multimodal biometric system is measured by the errors in image acquisition and matching of the biometric traits. Image acquisition errors include failure-to-acquire (FTA) rate and failure-to-enroll (FTE) rate. Matching errors consist of false non-match rates (FNMR) in which a legitimate subject is rejected and a false match rate (FMR) where an intruder is granted access. Multimodal systems have almost zero FTA, FTE, FNMR and FMR rates.

In a scenario where millions of people need to be enrolled in a system and some people might be facing problems with a particular biometric trait, multimodal systems can overcome this limitation by using a different biometric for that segment of the population. This will ensure almost zero failure-to-enroll (FTE) rate.

Multimodal biometrics can reduce data distortion. In cases where the quality of a biometric sample is unacceptable, the other biometric trait can be used. For example, if a fingerprint scanner rejects the fingerprint image due to poor quality using another biometric modality such as facial rejection will lower the false rejection rates.

Multimodal biometric systems are very difficult to spoof as compared to unimodal systems. Even if one biometric modality could be spoofed, the individual can still be authenticated using the other biometric identifier.