Terrorist events around the globe have been claiming headlines and news strips more often in recent years. These attacks mostly target civilians and claim lives of innocents. Use of violence against citizens is an increasing trend around the world to achieve political or ideological goals. Terrorist incidents around the globe cost thousands of lives every year and victims remain unaware of the reason of their sufferings. In some countries rebellions are using violence to protest government, costing lives, economy and infrastructure. Civil war in Iraq and Syria is one good example how bad things can turnout if not addressed timely. Countries with democratic system of government such as the United States, the United Kingdom, Japan, Israel, India, Indonesia, Spain, Philippines, and Germany have also experienced evil of terrorism.

Terrorist incidents may be carried out by a single person who is not associated with any organization, for example: lone wolf attack of 2016 in Nice, France, or it can be as organized as a government structure, claiming a large geographical region, for example ISIS reign in Iraq and Syria. In its organized form, terrorism has its own economic structure and it thrives on funding from many other legal or illegal activities. Funds often come from donations from successful people and organizations of same ideologies, foreign supporters, money laundering, etc. Frontline operatives of terrorism, who actually carry out these incidents, mostly stay unaware of the actual motives. They are told things that are easy to understand and hard to prove. Convincing them to wear suicide vest for the glory of great god is easier than telling them that this attack will make foreign investors flee and stock markets fall.

Terrorist attacks of September 11, 2001 shocked the world when terrorism hit the United States, which was considered to be comparatively safer place to live. It resulted in around 3000 deaths and more than 6000 injuries. These attacks were so deadly that 343 fire-fighters and 72 law enforcement officers lost their lives in the aftermath of the attacks. Attack on sovereignty of a nation which is considered a super power in the world, could not go without consequences. These attacks changed the whole strategy of counter terrorism and brought world to a single stand against terrorism. The United States waged war in Afghanistan against Taliban and terrorist settlements after a month of this incident, which was the longest running war in the history of the United States. Intelligence failure was mainly the reason behind this incident and the U.S. learned its lesson hard way. A need for advancement of intelligence and surveillance was felt by the government after these attacks. That’s where mass surveillance programs came into existence and budget of country’s intelligence and other security agencies skyrocketed. Airport terminals, coast guards and border security were strengthened. These steps, however, came at the cost of shrunken civil liberties. 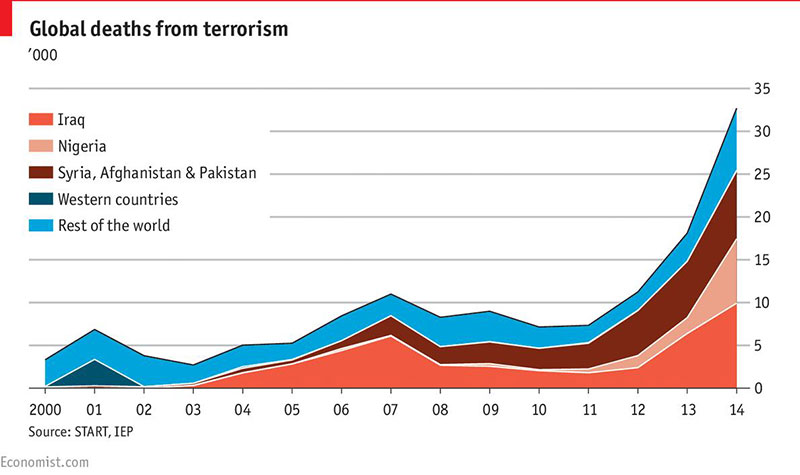 Numbers of deaths in terrorist incidents have increased by five-fold after the attacks of 9/11. Also, terrorists have modernized their tactics and using all sort of technology to carry out their motives. ISIS campaigns for recruitment on twitter have already made it to the news headlines. Use of technology have assisted terrorists but also have helped law enforcement and intelligence agencies to track down terrorist location and communication.

How terrorism affects our lives?

Terrorism affects everyone, from people who have lost their lives or lost someone to those who heard the news on TV. Terrorist Incidents spread fear and make people feel that they are not safe anymore, anywhere, and the government is not good enough to stop it, and that’s where the objective of terrorism succeeds. Terrorism kills way less people than road accidents the United States, but with road accidents people know what went wrong understand the reasons, unlike terrorist incidents, which take place just anywhere. Manchester Arena, London suicide bombing on May 22, 2017 took lives of 22 innocent people who were enjoying a music concert and left several injured. It happened at a place where, where any accident was least probable. This incident was carried out by a believer of extreme ideology who believed that those ideological motives can be attained by killing others. Even the gun violence kills less people than the terrorist attacks in the United States. 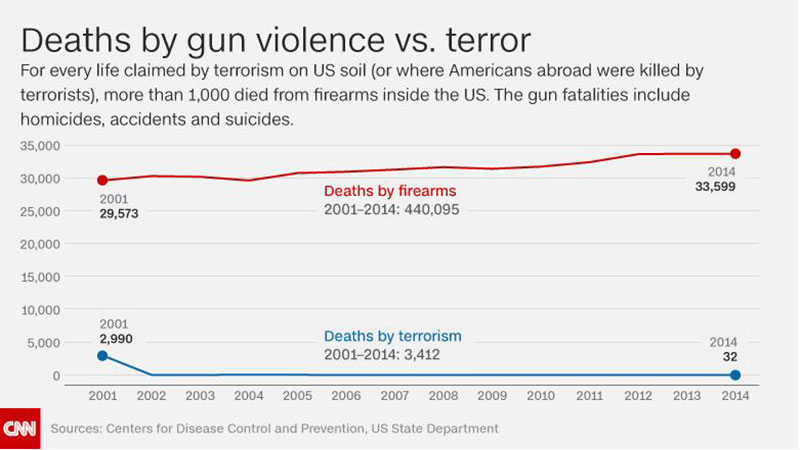 Terrorist events have lasting effects. Government had to take hard countermeasures to prevent incidents like 9/11, which came at the cost of some civil liberty. Before the terrorist attacks of September 11, 2001, people did not have to take off their shoes at airport terminals for security checks. People did not have to worry how their communication over the phone and internet is being watched. People didn’t have to protest about how their tax money is being spent on surveillance, war and weapon development and not on social welfare or healthcare.

Financial Frauds: Lets you live on, broken and depressed though

History is full of financial frauds, they date back to 193 A.D. when praetorian guards killed the emperor and offered sale of Roman Empire to the highest bidder. They tried to sell something that didn’t belong to them, and succeeded. People easily fall prey to get-rich-quick schemes, in which only the schemer is the one who gets to be rich quick. These fraudulent investment schemes are called ponzi schemes, named after Charles Ponzi, who was probably the inventor of modern financial frauds. He made people invest money in his fraudulent schemes back in 1920 and became infamous for it. These schemes usually promise unbelievably higher returns, which is initially paid by other investor’s money and not by profit. When a trust is build, and more and more people start investing, fraudsters collect as much as they can, and flee.

In September 2008, one of the biggest U.S. investment bank Lehman Brothers filed bankruptcy and the world’s largest insurance company, AIG collapsed, seeking a bailout of $85 billion. Sequence of events triggered a global financial crisis. Stock markets around the world gripped by fear and crashed like never before. Stocks fell off a cliff making largest single point drop in history. Stock markets continued to fall in the aftermath of the Lehman collapse. This resulted in a global recession, which cost the world tens of trillions of dollars; doubled the national debt of the United States and rendered 30 million people unemployed. This crisis was not an accident. It was caused by manipulative operations carried out by financial sector of the United States. Rise of U.S. financial sector has led to a series of more and more financial crises since the 1980s. Each crisis has caused more damage, while the industry has continued to make more and more money.

Financial crisis of 2008 started with more and more greed to sell houses on banks loans. Banks also uncontrollably sanctioned loans even to people with poor financial history. Investment banks created investment products out of these insecure loans and made people invest billions of dollars in the products that came out of these sub-prime mortgages. These potentially insecure products were sold by investment banks posing them as a very good investment option. Rating agencies were also involved in the whole scam and they gave high rating like AAA and AA+ to these products, making them look like a real good investment option. Most investors trust investment bank advisors and don’t go in details while buying investment products. Thin lines of terms and conditions make all evil motives legal. Investment banks knew from the beginning that what they are selling are very insecure investment option, they sold it anyway. The result was historic economic fall of 2008.

A report on Global Fraud Survey – 2015/16, published by Kroll, a corporate investigations and risk consulting firm based in New York City, says:
“The overall observation is that fraud has continued to increase, with three quarters (75%) of companies reporting they have fallen victim to a fraud incident within the past year, an increase of 14 percentage points from just three years ago. The number of businesses suffering a financial loss as a result of fraud has also increased, from 64% in the previous survey period to 69% this year.” 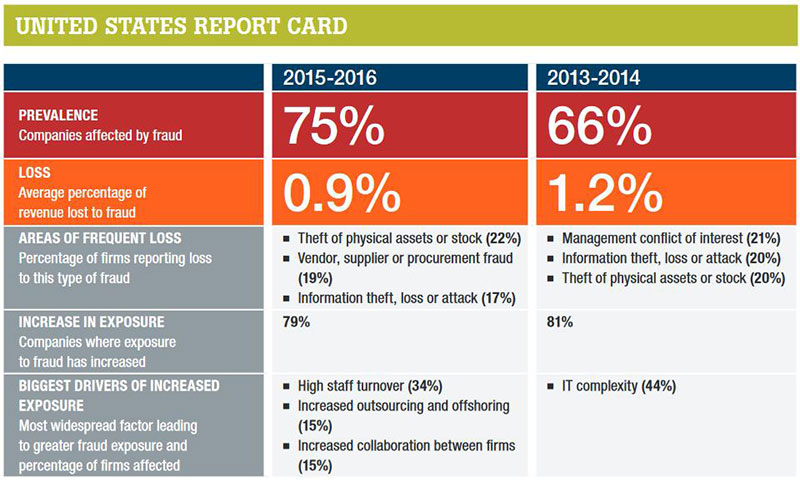 It’s not just the frauds from big financial companies to lure people invest money in insecure products. Banking frauds are also on the rise with more and more dependence on internet and mobile banking. People, who are new to internet and mobile banking, are called and emailed by fraudsters for falsifying various purposes like upgrading the credit or debit card, upgrading account benefits, updating personal information, renew the expiring credit card, etc. These fraudsters seek information that is required for performing a transaction over the internet. Out of fear and curiosity, naïve customers give all the details to these fraudsters and get cheated. In other similar incidents, people are made to follow instructions given in a phishing email that leads them to an authentic looking fake website, which further takes details of the customer and a banking transaction is performed. These transactions send money usually to a foreign account to make it hard to get it back, especially when both the countries don’t have a mutual legal setup to tackle incidents like these.

Both terrorism and financial frauds have one thing in common, they affect innocent lives. Terrorism, being at the brutal end, does not hesitate to kill people for the fulfillment of its motives, while financial frauds leave people empty, broken and depressed. Terrorist incidents may not be as common as financial frauds in developed or developing democratic countries, however, financial frauds do not reveal themselves until people are deep into it. Financial frauds are designed the way that they make us feel it like our own mistake. Insecure investment option we took, without analyzing all the facts and reading terms and conditions, is our own fault, right? Financial frauds may look like they are not as brutal as terrorist incidents, but that is not completely true. People lose their life’s saving in financial frauds. They lose money that they saved for buying a house or for their retirement. It leaves them broken and depressed. It gets their trust broken from the system and becomes hard for them to get it back.

“Financial frauds at least don’t kill you brutally”. That’s would be a general perception when compared financial frauds with terrorism, but that’s only half the story. Frauds can take more than a financial toll, even lives. According a study published by British Journal of Psychiatry rate of suicides dramatically spiked from 2008 to 2010.

Isn’t making someone suicide is as brutal as killing someone? Financial frauds are more like convincing you to wear a suicide belt and telling the consequences will be good. They are no less brutal than terrorism. Despite financial frauds making people end their lives or leaving them broken, there’s no one to claim the responsibility, unlike the terrorists killings. Even during the legal proceeding of 2008’s financial scam, company directors and CEOs who made this incident happen, tried their best to keep the responsibility off their shoulders. No financial company came forward to even take moral responsibility, unlike terrorist groups taking responsibility of their incidents, but that doesn’t make them less severe.