Americans Have a Right to Carry Firearms in Public: The Supreme Court Ruling Explained

Recently, the U.S. Supreme Court passed its judgment on carrying a firearm in public and ruled that Americans have a right to carry firearms in public for self-defense. We take a closer look at the Supreme Court’s judgment and the background of the court case that eventually ended up there.

There was nothing unusual this morning at Highland Park in the US state of Illinois.

Hundreds of people have gathered to watch America’s Freedom Day Parade on 4th July 2022– The U.S. Independence Day. Suddenly an attacker opened fire from the roof of a shop. In this attack, 6 people were killed and 31 were injured. It is not long ago that a mass shooting incident took place at Robb Elementary School in Uvalde County, Texas, leaving 22 dead including nineteen students and two teachers. This incident again opened the door for endless debate on whether there should be more severe gun controls or a complete ban on firearms or whether such incidents are just another security failure. 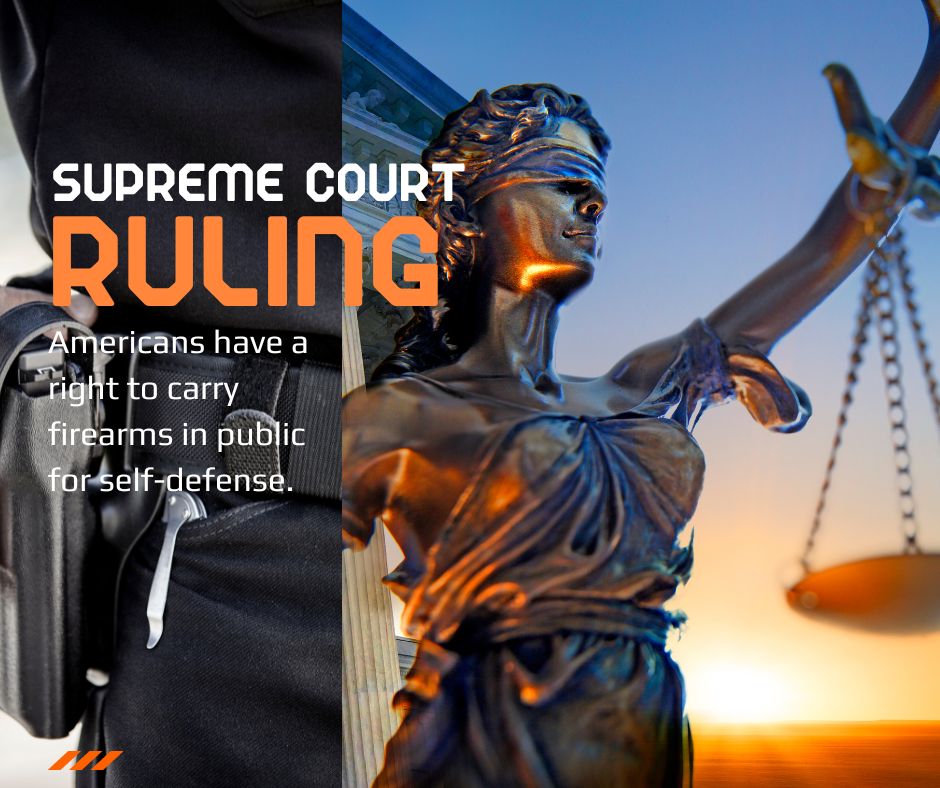 Background of the Supreme Court’s ruling

It is a crime in the state of New York to possess a firearm without a valid license. The state further extends this licensure requirement for carrying a firearm in public as per the state’s concealed carry permitting law. It requires residents of the state to obtain an unrestricted license to “have and carry” a gun (pistol or revolver) in public.

The state of New York’s concealed carry permitting law dates back to 1911 when Sullivan Act – a gun control law took effect in the state. The NY State law requires licenses for New Yorkers to possess firearms small enough to be concealed. Private possession of such firearms without a license is a misdemeanor, and carrying them in public is a felony. The act was named for its primary legislative sponsor, state senator Timothy Sullivan, a Tammany Hall Democrat.

As part of this process, applicants have to show that they have a proper cause backing their requirement to carry a concealed firearm in public. The resident seeking concealed carry permit has to demonstrate that their “proper cause” requirement is able to “demonstrate a special need for self-protection distinguishable from that of the general community.”

Their purpose was to be able to ensure self-defense. The state authority, however, denied their applications as they could not figure out “special need or a proper cause” in their case. Unfortunately, the state law never defined the “special need or a proper cause” so granting the license or denying it was more or less on the state authority’s discretion rather than rules and regulations.

Brandon Koch and Robert Nash challenged this decision in lower courts, which eventually went all the way to the Supreme Court. On June 23, 2022, the Supreme Court ruled that New York’s law, which had been in place since 1913, is unconstitutional and Americans have a right to carry firearms in public for self-defense.

Supreme Court gun ruling 2022 in New York State Rifle & Pistol Association vs. Bruen Superintendent of New York State Police case is of significant importance to maintaining a balance in gun control and people’s constitutional right to keep and bear arms. However, it is not the only court case that involved the 2nd amendment.

District of Columbia vs. Heller, 554 U.S. 570 (2008), was a landmark decision of the U.S. Supreme Court ruling that the Second Amendment to the U.S. Constitution protects an individual’s right to keep and bear arms in the United States. The court ruled that the District of Columbia’s handgun ban and the requirement that lawfully owned rifles and shotguns be kept “unloaded and disassembled or bound by a trigger lock” violated this guarantee.

In 2008, the Supreme Court ruled on the Second Amendment for the first time in almost 70 years after Dick Heller sued the District of Columbia over its ban on handguns in the home. The court ruled in Heller’s favor, affirming an individual right to keep handguns in the home for self-defense.

The judge said:
“Like most rights, the right secured by the Second Amendment is not unlimited. [It is] not a right to keep and carry any weapon whatsoever in any manner whatsoever and for whatever purpose.”
Justice Antonin ScaliaDistrict of Columbia vs. Heller, 2008

McDonald vs. City of Chicago, 561 U.S. 742 (2010), was a landmark decision of the Supreme Court of the United States that found that the right of an individual to “keep and bear arms”, is protected under the Second Amendment.

In McDonald vs. City of Chicago, the Supreme Court held in a 5–4 ruling that the Second Amendment applies to state and local governments in addition to the federal government. While Chicago’s complete handgun ban was overturned, the Court reiterated in McDonald’s that a wide variety of state and local gun laws are constitutionally permissible.

The court stated that:

“It is important to keep in mind that Heller, while striking down a law that prohibited the possession of handguns in the home, recognized that the right to keep and bear arms is not ‘a right to keep and carry any weapon whatsoever in any manner whatsoever and for whatever purpose.’”

Why was the second amendment created?

The roots of this constitutional right to keep and bear arms goes back in time when the British ruled the present day United States. At that time there was no permanent security force and people had to keep arms to ensure safety of themselves and their family. Under the Second Amendment to the Constitution in 1791, American citizens were given the right to keep and bear arms. This 230 years old law of America continues to this day.

Americans have a fundamental right to “keep and bear arms” and this right is protected by the second amendment of the United States constitution. There are also gun control laws in place, which have been introduced by different governments at different times in an attempt to curb the circulation of firearms by different means such as eligibility criteria, background check red tapes, proposing new definitions for firearms, etc.

These gun control laws are introduced to make sure that people are allowed to own guns but make it very difficult to do so for people with criminal backgrounds or drug users. In order to own a gun, you are supposed to be mentally healthy, should not be using illegal drugs, and should not have a criminal history. That straightaway makes you ineligible to “keep and bear” firearms. A firearm approval process is complicated and takes a considerably long time.

So gun control laws and regulations that are introduced and tightened from time to time may or may not be violating the second amendment, depending on the context. California, Hawaii, Maryland, Massachusetts, New Jersey, New York, and Rhode Island have state laws that regulate who may carry a gun in public.

“No state shall make or enforce any law which shall abridge the privileges or immunities of citizens of the United States; nor shall any state deprive any person of life, liberty, or property, without due process of law; nor deny to any person within its jurisdiction the equal protection of the laws.”

The Supreme Court ruling struck down the state of New York law which is case-specific to the state (New York State Rifle & Pistol Association, Inc. vs. Bruen), however, this ruling is also expected to affect other states that have similar laws.

The endless debate of constitutional rights vs. gun control

The United States is one of the few countries in the world that allows its citizens to own guns to ensure their security. This is often blamed to encourage gun culture. There are only three countries in the world where having a gun is a constitutional right – Unites States, Guatemala, and Mexico. However, people in Guatemala and Mexico have significantly fewer guns than in the U.S. Also, there is only one gun store in the whole of Mexico, which is controlled by the Army.

There is no doubt that owning guns has helped law-abiding citizens to deter many security incidents, which could otherwise be life-threatening for them but at the same time, easy access to guns has also resulted in incidents like mass shootings.

People, who support stricter gun controls or even complete bans, blame easy access to firearms for incidents like gun violence, mass shooting, suicides, etc. In fact, the U.S. has more guns in circulation than there are people – 334 million population of the country has 400 million guns.

According to The Gun Control Act (GCA), the minimum age to buy a rifle or any small weapon should be 18 years and the minimum age to buy other weapons such as handguns is 21 years. Only people dangerous to society, fugitive, intoxicated, mentally ill and have a criminal history, are not allowed to purchase guns.

According to a Gallup survey in October 2020, 44% of American adults live in a home with guns, of which a third of adults have guns.

What holds back the United States from stopping the gun culture?

Even after 230 years, the United States has not been able to effectively put guns under tight control for the following reasons:

Many politicians and influential Americans have been advocating for maintaining this culture from the President to the Governor of the states there. From Theodore Roosevelt to Franklin D. Roosevelt, Jimmy Carter, George Bush Sr., George W. Bush, and Donald Trump, many US presidents have advocated gun culture.

The gun lobby is also the main reason for the survival of this culture. According to a 2019 report, there were 63 thousand licensed gun dealers in the US, who sold guns worth over 100 billion to American citizens that year. The National Rifle Association (NRI) is the most powerful gun lobby in America, which spends a lot of money to influence the members of the U.S. Congress. This powerful lobby has been opposing changes to the proposed Second Constitutional Amendment to end gun culture.

The Supreme Court’s landmark judgment on carrying guns in public is surely phenomenal and will impact how the country navigates its way to maintain a balance between gun control and the constitutional rights of the American citizens. Supreme Court’s judgment comes at a time when the nation is split over repeated incidents of mass shootings across the country. Though the Supreme Court’s decision is regarding a case pertaining to the state of New York, its ripple effects will certainly be felt by other states that have similar laws.