Curve is a single fingerprint capture device from the house of Integrated Biometrics, a reputed brand in global biometric industry. IB Curve fingerprint scanner’s compact form factor and nicely designed housing makes it hard to ignore. Curve, however, is as efficient inside as it is beautifully designed outside.

IB Curve fingerprint scanner’s design and ergonomics may make you think that it is more focused on aesthetics to make it look appealing. However, when you go through its specifications, you would be pleasantly surprised to know that is one of a few scanners that offer a hybrid fingerprints sensor.

Integrated Biometrics Curve comes equipped with a hybrid fingerprint sensor that makes use of optical as well as capacitive sensing of fingerprints. Capacitive fingerprint sensors are known for their compact size and are widely used in mobile and portable devices such as smartphones, tablets, etc. Since they require human skin’s capacitance to work, their performance may be affected by wet or dirty fingers. On the other hand, optical sensor offers proven reliability in capturing fingerprints.

Both the fingerprint sensing technologies have their own set of pros and cons and when they come together, they fill the gaps of each other and bring the best of both the technologies.

The optical sensor found in eCurve mobile fingerprint scanner is not an ordinary optical sensor. It uses LES film based sensor technology, which is far ahead of its traditional prism based counterparts. Prism based optical sensors are the earliest sensors that were designed to captured fingerprints as automation in fingerprint recognition started taking shape.

Since then, optical sensors have been used in fingerprint scanners, which are still common. They are, however, suffer from many shortcomings that affect the performance and render them hard to maintain.

When finger is placed on the sensor surface, these luminescent phosphorus microparticles glow wherever the friction ridges come in the contact of the LES film. This luminance takes place because the finger skin’s capacitance helps LES film complete a low level electric circuit required for it. This narrow wavelength light illuminates the pattern of friction ridges and produces a high resolution image, which is captured by a digital TFT (Thin Film Transistor) or CMOS camera. The resultant image has the resolution of 500 pixels per inch.

If an imposter tries to circumvent Curve’s security with fake fingerprints made with silicone, paper, glue, latex, film or similar material. The LES sensor will not even respond to it. So fake fingerprints are rejected even before they are scanned. This is unlike most other software based liveness detection approaches, in which the scanners scan first and the underlying liveness detection algorithm analyze the print to be real.

Immune to latent and leftover prints

On the other hand, LES film based sensors does not depend on visible characteristics. They rather work on capacitance of friction ridges that illuminate the phosphorous microparticles in the LES film sensor. It results in microparticles glowing in exact fingerprint pattern which is instantly captured by a TFT / CMOS camera. Even if your finger skin is dry, dirty or stained, LES sensor will have no problem scanning it because they work with physical contact based illumination rather than taking a photo of visible features.

When there are leftover or latent prints on the scanner surface, the scanner camera captures them along with fingerprints. It results in performance related problems such as enrollment issues, false rejections, etc. To overcome this, prism based optical scanners need to be cleaned before performing a fresh scan to rule out any performance glitches.

If you have ever gone through high volume fingerprint scanning with an optical scanner, you must have witnessed that the operators clean the scanning surface after each scan. They do it because they do not want latent prints (left by previous scans) to disturb the next scan. This issue is found in optical sensors that are manufactured using a prism and make use of total internal reflection (TER) to capture fingerprints.

Twofold Biometric Security in One Scanner! 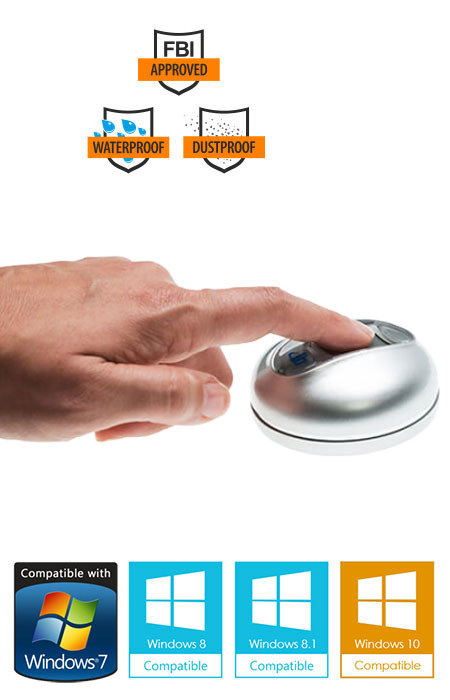 Integrated Biometrics Curve mobile fingerprint scanner is one of the few scanners that come with a curved sensor. Its sensor surface is curved to match the natural curvature of human finger. Curve’s curved sensing surface covers larger skin area for undistorted finger scan.

IB Curve fingerprint scanner is designed to be highly power efficient and keeping it up 24×7 will not have any significant impact on your power consumption. Light Emitting Sensor is already a sensing technology that consumes a very less power.

With curve, your identity authentication becomes as easy as touch-and-go. The device is equipped with a sensor to detect presence of human finger on the scanner’s sensing surface. The device automatically turns on and start scanning as soon as it detects a finger placed on it.