How Accurate are today’s Fingerprint Scanners? Limitations, Errors and Their Effect on the Accuracy.

Today, fingerprint scanners enjoy widespread popularity and growing rate of deployment sin all sorts of applications. One of the reasons of the growing penetration of fingerprint recognition devices is that they have been able to maintain the delicate balance between the convenience and the security. However there are still several issues, errors and limitations that this technology has to deal with.

What are different errors in fingerprint matching? How the fingerprint error rate is evaluated and what are the limitations of fingerprint biometrics? This article tries to dig the topic deeper. 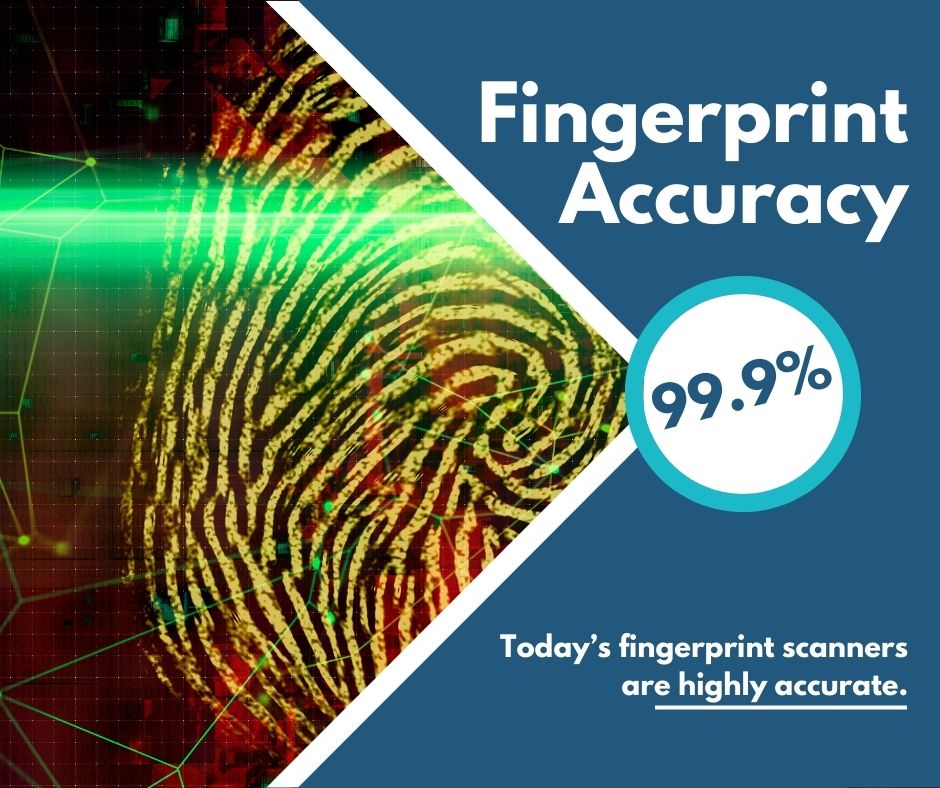 Fingerprint matching: accuracy is the key

This delicate balance of security and convenience is very important for the fingerprint scanners to maintain. If you design them to be highly secure, they would become inconvenient. On the other hand, the high level of convenience would compromise security. So it is crucial to maintain this balance to ensure user convenience as well as optimum level of authentication security.

This security – convenience balance is also the reason why sometimes fingerprint scanners refuse to pass you through, despite presenting the registered fingerprint. If they find your scan to have not enough details / clarity, they might ask for a rescan to ensure that it is in fact the authorized person who is seeking the access.

Accuracy is an important factor to ensure that security – convenience balance stays maintained. Accuracy itself depends on a lot of sub-factors including the components and technology used in the scanner, environmental factors, as well as the quality and usability of user fingerprints. These factors directly affect the fingerprint image quality captured by the scanner, which in turn affects the scanner performance directly. In fact fingerprint image accuracy is the key to matching performance, which we have covered in great detail in this article.

At user level, today’s fingerprint identification technology may seem impeccable. If you register one finger, there is no way you would be able to authenticate using another finger. There are chances that you had already tested it on your electronic devices such as phones, notebooks, etc. using different fingers. No surprise that fingerprint recognition may seem impossible to fool during such user level tests.

Following are the major types of errors made by the fingerprint as well as other biometric systems:

This is the type of error that most users encounter, especially who use fingerprint authentication frequently. Commonly referred to as “failed attempt”, false rejections are more prevalent than any other type of errors. This error occurs when a recognition system refuses to let you through, even if you present the registered fingerprint. This error is not application, device or systems specific and you can come across it on any fingerprint recognition system, such as your phone, PC, biometric ATM or office attendance system. It is a “false” rejection, which means that it should have been accepted by the recognition system.

There can be many reasons behind the rejection of a registered fingerprint by the recognition systems such as dirty / wet / dry fingers, environmental conditions (extremely hot / cold weather), dirty / scratched / broken sensor surface, etc. Regardless the type of the reason of a failed attempt or false rejection, bad image quality of captured fingerprint image is the root cause of this incident.

When the recognition system is not able to capture the fingerprint image above the set quality threshold, it will reject the acquired image and ask the user to rescan.

False acceptance, as the name suggests, is an erroneous outcome in a fingerprint recognition systems, in which the systems fallaciously accepts an unregistered / unauthorized fingerprint scan and grants the access. False acceptances can be a more concerning than the false rejections, as they can let an unauthorized user to gain access to the sensitive resources or physical facilities. Incident of false acceptance takes place due to erroneous matching of a sample acquired for performing authentication with a stored template, which belong to an authorized user.

How fingerprint error rate is evaluated?

To evaluate fingerprint error rate of a target recognition system, it is taken through the security ad performance evaluation process. During this process, the target system’s security is evaluated by making fingerprint matching attempts with registered as well as imposter fingerprint scans. Data of the outcomes (match / no match) is collected and analyzed. It is made sure that the system performs as per expectations and false rejection rate and false acceptance rate is below the set standards. If they are not, the system is recalibrated until the expected performance is exhibited by the systems.

However, fingerprint biometrics still has many limitations and challenges to address.

Following are the major limitations of fingerprint biometrics:

Despite the unprecedented growth and advancements in biometric fingerprint recognition technology, spoofing still remains the biggest challenge for this technology. Biometric spoofing is a circumvention method, in which a fake replica (such as finger, mask, eye, etc.) is presented to a biometric system in order to circumvent its security. This replica has to have the exact biometric pattern to be able to circumvent the systems.

To address the problem of spoofing attacks, today’s biometric fingerprint recognition systems make use of anti-spoofing technologies and liveness detection mechanism. It is helpful in ensuring that the fingerprint sample is presented by a person and not by a spoof, however, a highly sophisticated spoof that can imitate liveness features may still be able to fool these systems. Spoofing attacks and anti-spoofing countermeasures are going to be a constant tug of war between the security experts and cybercriminals.

Biometric identifiers are unalterable in nature, which means they cannot be changed like your password or PIN or reissued like IDs, if compromised. If a cybercriminal is able to capture your biometric patterns (such as fingerprint pattern, 3D face geometry, etc.), s/he can create spoofs (such as fingerprint replica, 3D face mast, etc.) to circumvent a biometric system you are registered on.

There is also a possibility that an electronic system (such as a sniffer, third party application, etc.) is used in conjunction with the biometric system to capture your digital biometric data when you use the system. Biometric devices encounter this problem by encrypting the biometric data before storing or transmitting it. Anti-spoofing and liveness detection technologies are other approaches to deter circumvention of biometric systems.

Like all other technologies, biometric systems also suffer from technology related limitations. Today’s fingerprint recognition systems can work in harsh environmental conditions as well as challenging scenarios, still they cannot keep up beyond a certain limit. For example, harshest environmental conditions such as excessive humidity, extreme temperature, intense ambient lighting, etc. may cause them to break. Technical failures may be rare, yet they can happen. Fingerprint recognition systems, being electronic devices, depend on electricity to function so episodes of power outage / failure will render them unusable.

Time of response in modern fingerprint biometric systems is faster than ever and in 1:1 matching, most system will take only a fraction of a second to authenticate an identity. However, the biggest problem with these systems is reliability when used in crucial situations, where errors such as false rejection cannot be afforded.

Superficially, fingerprint biometrics may seem as if it has the ability to provide identity to anyone who has at least one finger; however that is not always the case in real life circumstances. Today’s biometric fingerprint recognition systems are more efficient than ever and would accept most fingerprint patterns. However, they still need fingerprint quality of to be above a certain threshold to be able to accept and process them further.

Work conditions that require people to use hands for manual labor or handle chemicals regularly, can also cause fingerprints to wear off. Population coverage can be a major challenge in large scale biometric identification campaigns. However, this challenge can be addressed with multi-modal biometrics that leverages more than one biometric modality to establish an individual’s identity, (such as face + fingerprints).

So, how accurate fingerprint scanners are today?

National Institute of Standards and Technology (NIST) a U.S. agency that works in the area of standardizations and technology conducted a study to test the modern fingerprint scanners in terms of accuracy. The agency tested 34 commercially available fingerprint scanners from 18 brands available across the globe. In the study, the agency found the best performing fingerprint recognition systems to be highly accurate – they were accurate more than 99 percent of the time.

“The most accurate systems were from NEC of Japan, SAGEM of France and Cogent, an American company. The performance of these three systems was comparable. The performance varied depending on how many fingerprints from a given individual were being matched. The best system was accurate 98.6 percent of the time on single-finger tests, 99.6 percent of the time on two-finger tests, and 99.9 percent of the time for tests involving four or more fingers. These accuracies were obtained for a false positive rate of 0.01 percent.”
National Institute of Standards and Technology (NIST)

The study clearly shows that today’s fingerprint scanners have reached a point where their accuracy can be more than 99 percent, provided you use high quality scanners.

The rate of adoption of fingerprint scanners during the last couple of decades has been astonishing. Once stigmatized as a criminal identification method, this technology now enjoys widespread acceptance. One of the major factors driving the growth of fingerprint biometrics is the perfect balance of security and convenience that it offers.

There are still challenges and limitations in terms of technology, population coverage and security, however, most these challenges can be and will be addressed at some point in future.

Sorry, we aren't online at the moment. Leave a message.

We'll get back to you as soon as possible.
We're online!

Questions, issues or concerns? I'd love to help you!.

Help us help you better! Feel free to leave us any additional feedback.

How do you rate our support?