The basics of traditional fingerprinting techniques are simple. The skin on the palmar surface of the arms and legs forms protrusions, the so-called papillary ridges, patterns that are unique to each person and do not change over time. Even identical twins (with a common DNA) do not exhibit identical fingerprints.

The deliberate recording of friction ridges is usually done with black printer ink scrolled over a contrasting white background, usually a white card. Friction ridges can also be recorded digitally using biometrics, in which a digital image capture mechanism works beneath the surface, a technique called live scan.

Live scan has been prominently used to record fingerprint images as it is not only fast and convenient but also records images in digital format. Digitization makes it possible to perform all kinds of operations such as indexing, sorting, matching, storage, and transmission over a network (such as the internet). 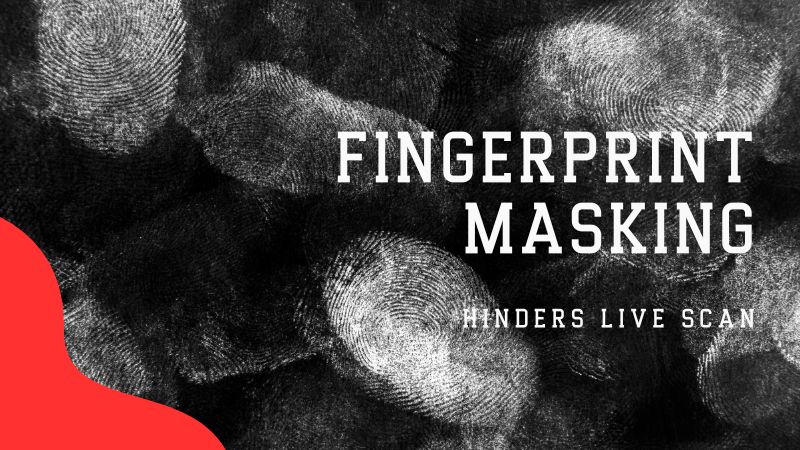 There is a long list of advantages that live scan fingerprinting systems offers; however, they also have some limitations as most digital technology-based systems do. It is always advantageous to explore the limits of the live scan systems and that is what biometric security experts as well as independent researchers have been doing – pushing live scan systems to their limits.

One such experiment that has been conducted by an independent researcher is – Are live scan systems able to read or detect masked fingerprints? Let’s find out what were the outcomes.

What are masked fingerprints?

There have been incidents in the past in which individuals have tried medical surgery to avoid deportation from a country they had illegally entered.

Fingerprints can be intentionally or unintentionally masked by a layer of material that may or may not temporarily deteriorate or mask the natural characteristics of fingerprints that they exhibit otherwise. For example, if you apply a thin layer of transparent glue or wet silicone on your fingertip and dry it off, you have just masked your fingerprints.

Another example of fingerprint masking is the use of gloves, which can be worn to prevent fingerprints from being left behind on surfaces. This can be useful in certain situations such as when handling evidence in a forensic investigation to avoid contamination. However, it is important to note that gloves can also leave behind other types of evidence such as fibers or sweat that may be useful in an investigation.

Overall, fingerprint masking can be a useful tool for protecting privacy or preventing identification in certain situations. However, it is important to be aware of the limitations and potential risks of using these methods.

Chemical development is another technique that can be used to extract latent overlapped fingerprints. This process involves applying a chemical solution to the surface where the latent fingerprint is located, which can help to highlight the fingerprint and make it easier to extract and analyze.

Live scan is a technology that uses digital scanners to capture and record fingerprints electronically. These scanners use a variety of techniques to acquire high-quality fingerprint images, including capturing multiple images at different angles and using advanced image processing algorithms to enhance the quality of the image.

In general, live scan systems are designed to be very accurate and can detect a wide range of features in a fingerprint image, including ridge patterns, minutiae points, and other details that are used to identify individuals. However, it is important to note that the accuracy of a live scan system can be affected by a variety of factors, including the quality of the fingerprint image, the condition of the scanner, and the software being used to process the image. 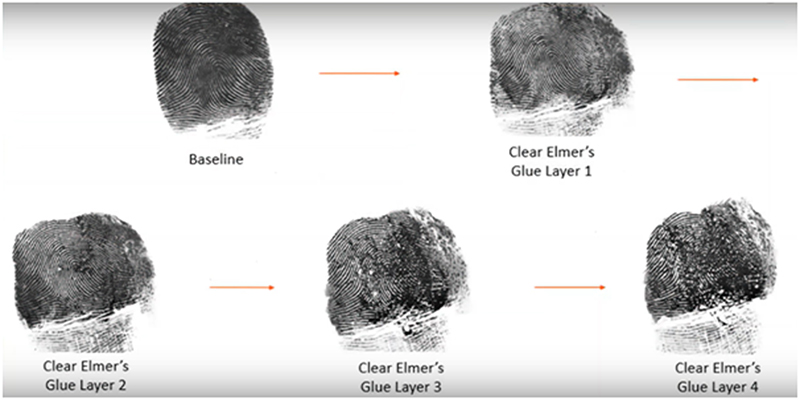 Image: Live scanned images of masked fingerprints with clear elmer's glue. Image quality was seen deteriorating significantly as more and more layers of the substance were applied to mask the fingerprints.

Image: Resultant images of masked fingerprints with clear nail polish and scanned with a live scan system. Image quality deteriorates significantly as more layers of the substance are applied to mask the fingerprints.

In an experiment conducted by an independent researcher, it was observed that the fingerprint images of masked fingerprints captured using a live scan system were found to be of poor quality. The researcher used different materials such as nail polish of different colors (including transparent nail polish), clear Elmer’s glue, whiteout, etc.

The experiment proved that the live scan systems cannot detect usable quality fingerprints when a making substance is applied to the fingerprints.

Today’s live scan systems are highly advanced equipment that is designed to capture and record high-quality fingerprint images quickly and accurately. These systems are used in a variety of settings, including law enforcement agencies, border control points, and other locations where it is important to accurately identify individuals based on their fingerprints.

While live scan systems can detect and record a wide range of features in a fingerprint image, the accuracy of the system may be affected by the presence of a mask or other obscuring elements in the image. In order to get the most accurate and reliable results, it is important to ensure that the fingerprint image is of high quality and that any masking or obscuring elements are minimized.