Data in digital form offers many advantages. A large amount of data can be stored in a very small space. It can be processed and converted using IT systems. You can look up a particular piece of information just by pressing a few keys, no matter how large the data is.

Regardless of all the convenience digital data offers, it also suffers from a drawback: duplication. A large amount of storage may only be occupied by duplicate files and records. It can be more evident in data-intensive applications without any data de-duplication strategy in place. In some cases where data is poorly managed, there can be many instances of a same file, resulting in storage shortage. 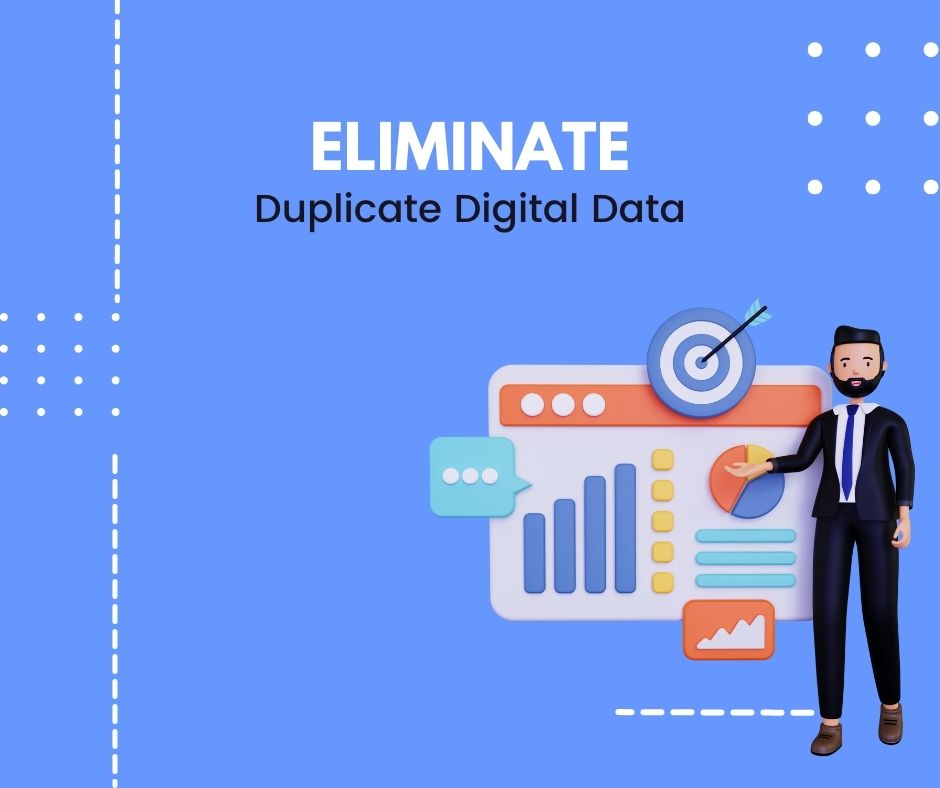 Image: Data de-duplication is an approach to eliminate duplicates in digital data.

Why does duplication occur?

Data duplication is a very common occurrence in today’s digitized life. A simple drag and drop can create a duplicate copy when handling your personal data. At personal level, it may not affect us much, however, when it comes to large data-centric business applications, data duplication can be a concern.

Digitization is on the rise and it is good as digital data can be handled more efficiently than data stored in other forms (such as paper based documents). Despite being easy to process, digital data suffers from the problem of duplicates. When backed up, processed or transferred in large volumes, digital data is can be prone to duplication. De-duplication of large volume of data is an intimidating but important task.

What is biometric de-duplication?

Regardless of the method employed, data de-duplication ensures that only one unique piece of information is stored on the media. In this regard, an important point of this technology is the level of detail. De-duplication can be done at the file, block, and byte level. Each method has its advantages and disadvantages.

Why duplication in biometric data occurs in the first place?

While performing data related operations like transfer, migration, back up, editing, etc. (especially when dealing with large volumes of data), duplication may occur. Sometimes duplication in biometric data may occur due to errors during the enrollment. In large scale biometric data collection drives, e.g. biometric voter ID, biometric nation ID campaigns, etc., biometric data is collected from different locations and transferred to the main database. In such large scale drives, possibility of data duplication elevates.

Why biometric data de-duplication is required?

Duplicates in biometric data may result in lack of reliability, system inefficiency and lead to errors in identification. When there are duplicates in the stored data, a system has to work longer to index and compare the records because it has to go through duplicate records as well. Time taken to retrieve any query the also increases, reliability of identification remains questionable despite that. Duplicates in biometric data also consume storage, which could be used to store clean data otherwise. It takes a significant toll on system resources and cost.

Storage based de-duplication eliminates redundant files and reduces the amount of space required to store data. It results in many benefits which are discussed later.

One of the most common methods for data de-duplication is comparing and detecting duplicates in chunks of data. To enable compare-and-detect methodology, chunks of data are assigned an identification using cryptographic hash function.

Data de-duplication can be performed on the following levels:

File level de-duplication compares a file with files already saved. If the file is unique, it is saved; if such a file already exists on the device, only the pointer (link) to the existing file is saved, thus, only one copy of the file is always saved, and subsequent copies are linked to the original file. The advantages of this method are simplicity, speed and almost without performance degradation. 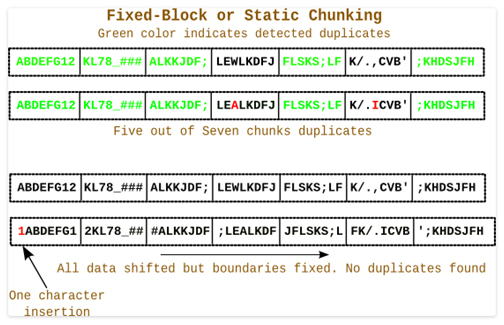 Block-level de-duplication is the most common de-duplication method that analyses a piece of data (file) and stores only unique repetitions of each block. A block is a logical unit, so it can have a different size (length). All data fragments are processed using a hash algorithm, such as MD5 or SHA-1. This algorithm creates and stores in the de-duplication database an identifier (signature) for each unique block.

If during the life cycle, the file has changed, only the modified blocks get into the storage, not the entire file, even if only a few bytes have changed. 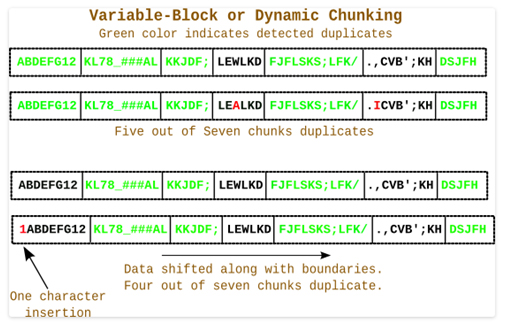 De-duplication at the byte level

De-duplication at the byte level is similar to the principles of its work with de-duplication at the block level, only instead of the blocks there is a byte-by-byte comparison of new and modified files. This method is the only method that guarantees the complete elimination of data duplication, but it has very high performance requirements.

De-duplication on the basis of place of execution

In backup, in addition to the methods described above, de-duplication may differ in the place of execution, at the data source (client), on the storage device side (server) or as a joint work of the client server.

Server side de-duplication is possible when data is transferred to the server completely in its raw (original) form (without compression or encoding). De-duplication on the server is divided into hardware and software.

With collaborative client server de-duplication, processes are performed on both the client and the server. Before sending data from the client to the server, two devices first try to figure out what data is already in the storage, for this the client calculates the HASH for each data block and sends it to the server as a file, like a sequence of hash keys.

The server accepts and compares the received hash keys with its HASH table, then sends the response to the client in the form of a new list of HASH keys that it does not have in the table. And only after that, the client sends data blocks to the server. The effectiveness of this method is achieved through the transfer of data processing to the server and low network load, since only unique data is transmitted. 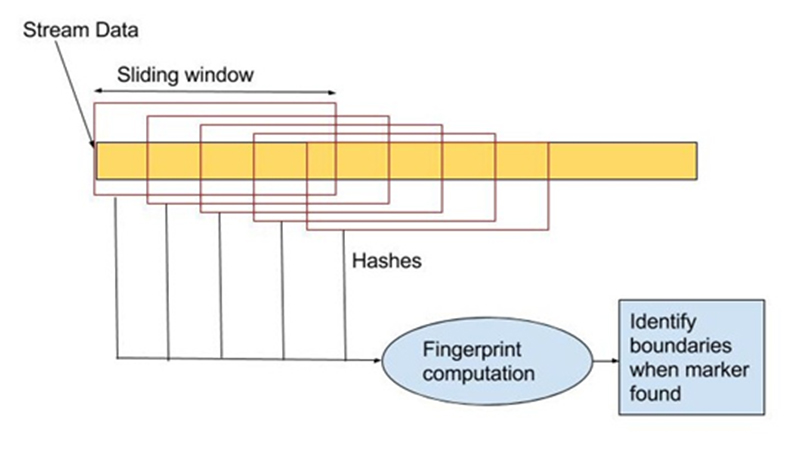 Computing a hash value of a few consecutive bytes at every byte position in the data stream can solve the problem of determining chunk boundaries. A chunk boundary can be declared where hash value matches a certain predefined pattern. Rolling hash is a hash function, which uses a sliding window to hash input and provide hash value at each point.

where ‘n’ is the window size and X(i,n) represents the window bytes at byte position ‘i’. In mathematical terms this is a recurrence relation. 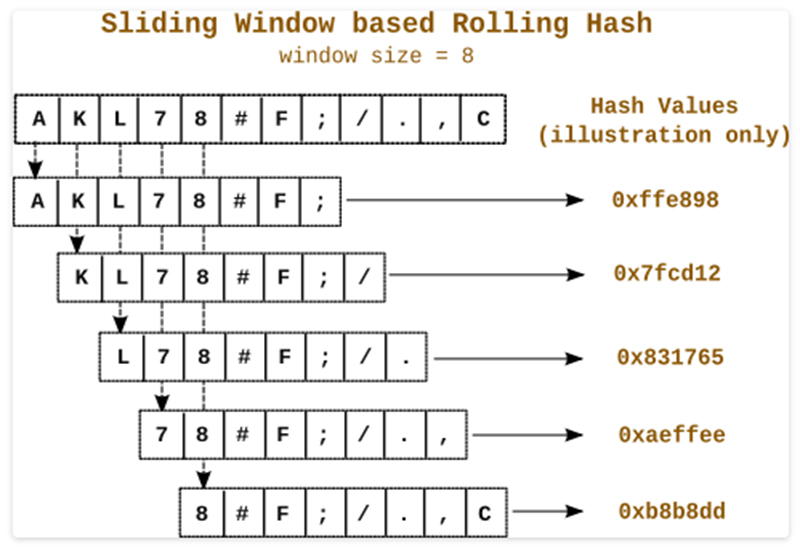 Fingerprint is a hash value that is specialized for the specific chunk, since the hash functions are collision resistant; having the same fingerprint means (with a very high probability) the two data blocks are identical. So to avoid wasting resources on storage of duplicate data only one of them will be stored. If the data block is different from another their fingerprint would be different, so both of them will be stored.

Rabin fingerprint is used to find boundaries of a data chunk, which leads to identification of the chunk. With sliding windows, fingerprint of each window can be computed quickly based on the previous fingerprints.

De-duplication, as the name signifies, is a strategy to eliminate duplicates from data. A typical example of this would be a document distributed to all employees in a large organization. If the document volumes 10MB and there are 1000 employees, it will cost the organization more than nine gigabyte of storage, which could otherwise be using only 10MB if only once instance of the document was stored and used.

This is just a small example, let’s take this scenario to a cloud storage service, on which millions of people store their data. Many of these user files may be media (music albums, movies, ebooks, etc.) which will be same for all users. Just one instance of such files can be stored and reference is served to all users, it will result in huge reduction in storage requirements.

The following table shows typical savings that result after performing de-duplication for different types of content:

For the best data storage practices, compression must follow de-duplication and not the other way around. Compression redundant data would not bring real benefit as duplicate record will also be compressed and the anticipated reduction in storage requirement may not be achieved.

Following are the major positive impacts of data de-duplication:

The main problem associated with de-duplication is data conflict, which may occur if two different data blocks generate the same hash key. In case of a conflict, a database corruption occurs that causes a failure when restoring a backup. Larger the database, higher the frequency of changes and bigger the possibility of conflict situations. The solution to this problem may be to increase the hash space, since the larger the hash keys, the less likely the conflict. Currently using a 160-bit key generated by the SHA-1 algorithm. These are 2160 = 1.5 x 1048 unique hash keys.

As the world turns more and more digital, data de-duplication has become more relevant than ever. Need of biometric data de-duplication is also set to increase as biometrics controlled smart devices and IoT devices grow. When coupled with today’s information environment, these devices will be generating a huge amount of data every minute and without de-duplication technology in place, this data can negatively impact storage.

Data duplication can take significant toll on resources specially when dealing with large volumes of data. In data intensive services like data centers, cloud storage service, etc., where huge volume of data is stored, processed and transferred, duplication in data can be have huge impact on storage resources.